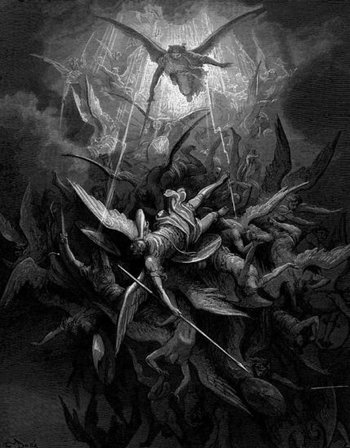 "And stay out!"
"What in me is dark
Illumine, what is low raise and support;
That to the height of this great argument
I may assert eternal Providence,
And justify the ways of God to men."
— Book 1, Line 22-26
Advertisement:

Paradise Lost is John Milton's sprawling epic poem which explores the Fall of Man and reconciles God's omniscience with Free Will. First published in ten books in 1667, the twelve-book version modern readers will be familiar with came out in 1674.

Notably focusing largely on the infernal Serpent, Paradise Lost is a retelling of the third chapter of Genesis in the form of an epic poem with the addition of flashbacks to the war between Satan and the angels, clear references to the Son of God, and visions provided by the Archangel Michael that show Adam what happens in later parts of The Bible. In epic theory (and yes, such a thing exists), Paradise Lost is the final epic, as it has elements of everything from The Odyssey up through The Divine Comedy and The Faerie Queene.

Famously illustrated by Gustave Doré two centuries later, providing our page image. It can be read online for free

Paradise Lose & Overly Sarcastic Production portray Satan, with his rebellion and turn from God being driven, by his envy for Jesus & his father.

Example of:
Driven by Envy

Paradise Lose & Overly Sarcastic Production portray Satan, with his rebellion and turn from God being driven, by his envy for Jesus & his father.