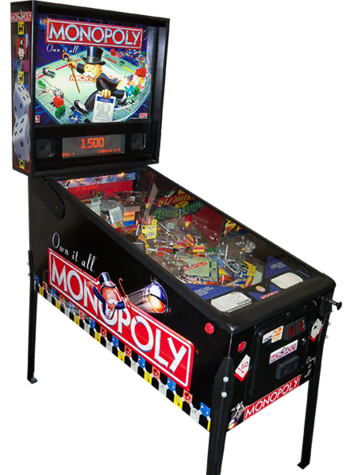 Own it all.
"Be a tycoon... like me!"
— Uncle Pennybags
Advertisement:

Monopoly is a 2001 pinball machine released by Stern, designed by Pat Lawlor and his crew at Pat Lawlor Design. Based on the classic board game, it contains several elements from its source, altered to fit the new medium. The main goal is to progress around the board by shooting certain shots, stopping to buy property, while ultimately becoming rich enough to own it all.

The machine has several notable features, such as a rotating flipper on the far right that often screws with the ball’s path and a mini-dot matrix display.

In November 2001, Stern Pinball and Pinball Sales auctioned off 40 "Platinum Edition" games on eBay for the nonprofit charity Boundless Playground. These tables had chrome trimmings signed by Pat Lawlor, John Youssi, and Gary Stern, along with a backbox translite autographed by Lawlor, Youssi, Stern, Pinball Sales president Jack Guarnieri, and Hasbro CEO Alan Hassenfeld. The production run of 40 was chosen as one for each space on the Monopoly board.

This pinball machine proves examples of: