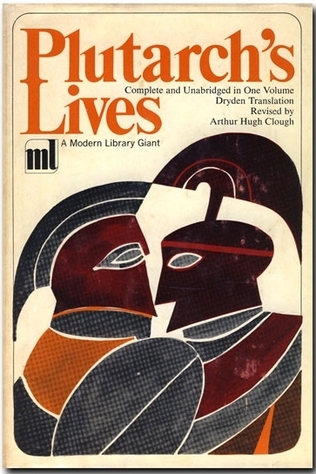 I am not writing history but biography, and the most outstanding exploits do not always have the property of revealing the goodness or badness of the agent; often, in fact, a casual action, the odd phrase, or a jest reveals character better than the battles...just as a painter reproduces his subject's likeness by concentrating on the face and the expression of the eyes, by means of which character is revealed...I must be allowed to devote more time to those aspects which indicate a person's mind and to use these to portray the life of each of my subjects, while leaving their major exploits and battles to others.
— Life of Alexander
Advertisement:

Also known as Lives of the Noble Greeks and Romans or Plutarch's Lives after its author, Parallel Lives is a series of biographical essays written in Greek by the historian Plutarch (46-120 CE) during The Roman Empire.

The conceit of the work is to match one Greek biography with a Roman biography, based on Plutarch's perceived similarity between the two figures, and finish it with a comparison where Plutarch analyses each subject's common points, strengths, weaknesses, virtues, and vices. It is one of the most important secondary sources for Ancient Greece, The Roman Republic and a primary source for the early empire. It's especially celebrated for being one of the key sources for Alexander the Great. It's also considered the Trope Maker and Trope Codifier for the "biography" as a genre. The word "biography" in English was popularized by the translation of the works overseen by John Dryden, and Plutarch's particular way of trying to portray his subject's character, the influences on his person, general contradictions and paradoxes, as well as an even-handed attempt to empathize with his subjects as much as possible, remains the central standard for all biographies, and biographical fiction in multiple media, well into the 21st Century.

Plutarch's characterizations of his subjects in prose in turn greatly inspired novelists and dramatists working in fiction centuries later. Most notably, this book is one of the major sources used by William Shakespeare for his plays (chiefly Julius Caesar, Antony and Cleopatra, Coriolanus, Timon of Athens). Shakespeare used Thomas North's 1579 translation, which was a translation not from the original Greek, but from the French translation by Jacques Amyot in 1559. The definitive English translation was overseen by the poet John Dryden in 1683. Dryden edited the entire effort, translating from the original Greek into English, and this translation revised by multiple authors remains the most widely available and often quoted version. It's also in the public domain.

The surviving work is incomplete with many lives and comparisons missing (including one on Scipio Africanus). Likewise some of the biographies and comparisons, notably those on the later Roman Emperors (Otho and Galba) are believed to have been separate works grouped together by later authors. In addition there is one Persian life (Artaxerxes II) that likewise seems incongruous with the theme.

The following Roman and Greek Lives have entries on their own in this site, many of them using Plutarch as a source: