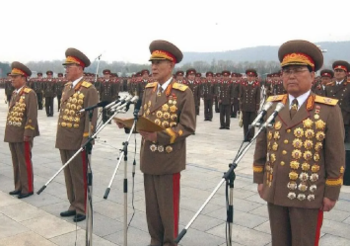 The General Staff of North Korea shall be defeated with a giant magnet!
Just look at Rear Admiral Woodward RN, right prior to taking his task force to retake the Falkland Islands. Who is the real professional warrior - the Brit with one ribbon or the North Korean gangsters?
— Cdr Salamander, here.

A military (or police) officer wears on their person an improbably large number of medals and other decorations for their age/rank/duration of service. Forms this trope can take include...

It's not uncommon for examples of 1 and 2 to decline to actually wear all of their ribbons and medals if their particular military allows that to be done (in some cases, they might not be allowed to wear certain ones on their uniform), either out of modesty or because putting on so many medals every day is a pain in the ass.

In military lingo, the area on the uniform where medals and ribbons are worn is often referred to as a "fruit salad" or "party salad".