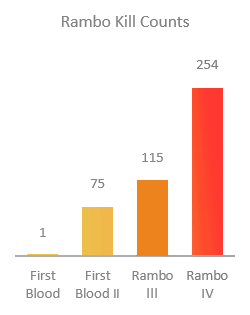 "There are certain rules that one must abide by in order to create a successful sequel. Number one: the body count is always bigger. Number two: the death scenes are always much more elaborate — more blood, more gore. Carnage candy."
— Randy Meeks, Scream 2
Advertisement:

Sometimes a sequel is just the same story as the last one (Capcom Sequel Stagnation), or downgraded by being Direct to Video (Starship Troopers 2: Hero of the Federation), or a different story set in the same world (The Godfather Part II, the Star Trek films), or just the next part in an ongoing series (Star Wars, The Lord of the Rings books and movies), or even a Dolled-Up Installment (Super Mario Bros. 2).

This trope, on the other hand, is when a sequel is made to be "bigger and better" than the last film, by taking one or more elements from the first film and expanding upon it. The film makers feel a need to "top themselves" in a sort of way.

Take an action sequel, which has more explosions and fist/gun/martial arts fights than the previous film. Or a slasher sequel, which has more deaths, in more gory (and less realistic) ways. Sometimes what get expanded is the plot: What started as a simple and straightforward plot in the first part may become significantly expanded, deeper and more intricate in sequels.

However, choose the right element(s), and the sequel may even be considered superior to the first film. Usually these elements involve the human element, expanding on the characters we care about, telling a dramatic (or hilarious) story, and making the action sequences revolve around that.

Usually, the result is somewhere in the middle, often debated upon by the fans.

To avoid just rehashing examples from Sequelitis, examples here should discuss the expanded element(s) of the sequels.

A Sub-Trope of Sequel. A Sister Trope to Serial Escalation.

Compare Actionized Sequel, Sequel Difficulty Spike, Prolonged Video Game Sequel, Send in the Clones, Up to Eleven, Sorting Algorithm of Evil, Power Creep. Big Damn Movie is this trope applied to a film adaptation of a serial. Darker and Edgier often, but not always, accompanies the upping of the stakes in sequels.

Contrast Lensman Arms Race, Plot Leveling (both of which can be seen as symptoms of this trope's presence) and Sequel Difficulty Drop (difficulty getting lowered, although that doesn't preclude this trope in other ways).