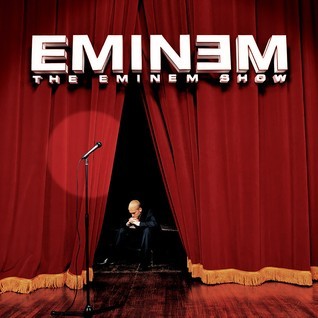 Guess who's back — back again?
Shady's back, tell a friend.
What I did was stupid, no doubt it was dumb
But the smartest shit I did was take the bullets outta that gun
Cause I'da killed him; shit I woulda shot Kim and him both
It's my life, I'd like to welcome y'all to The Eminem Show...
— "Cleanin' Out My Closet"
Advertisement:

The Eminem Show is the fourth album by Eminem, released just before summer 2002.

With this album, Em had extremely big shoes to fill, considering his last two releases (The Slim Shady LP and The Marshall Mathers LP) became some of the greatest critical and commercial successes hip-hop had ever seen, and everyone was wondering if Em could pull off the threepeat.

This new album saw an introspective tour of Em's world of fame, and many of the tracks showed a maturing Mathers, with sadder and more sincere lyrics concerning personal topics like his daughter and his parents. He even gave the album its name since he felt like his life was amounting to nothing but a show for the public to constantly ogle at.

The Eminem Show gave him his third consecutive Grammy Award win for Best Rap Album as well as his second consecutive nomination for Album of the Year. It was also his second album in a row to be certified Diamond by the RIAA for selling over 10 million copies, and it has gone on to sell three times that around the world.

2004's Encore is a direct sequel to the album, continuing the "show" concept and theming. In 2022, Eminem released The Eminem Show: Expanded Edition, a re-release of the album adding two bonus studio recordings — "Stimulate" and "Jimmy, Brian and Mike" (originally intended for The Marshall Mathers LP) — as well as various live performances and freestyles.

Tropin' Out My Closet