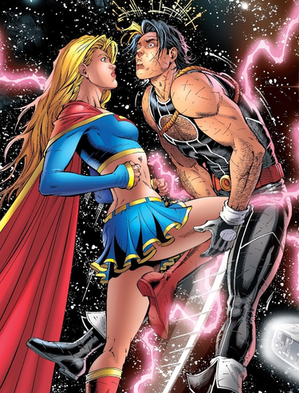 Woman of Steel, Crotch of Kleenex.
"But the ball! In his groin! It works on so many levels!"
— Homer Simpson (critique of amateur film "Man Getting Hit By Football"

It's not always played for comedy, but seeing someone get struck in the crotch is usually just plain funny. Whether the object doing the striking is an errant piece of sports equipment or a deliberately placed foot, the end result is going to be a grown man doubled over and trembling with pain. Bonus points if he then hobbles away and says something in a high-pitched voice. Not only will everyone find this hilarious, but tape it and play it back for the guy and even he will probably laugh. At least, once the swelling goes down. Sometimes a cause of Amusing Injuries, especially if the victim is asking for it. In shows targeted at children, it's often a Dangerous Forbidden Technique, or at least treated as one in-story (see 3 Ninjas and Mighty Morphin' Power Rangers: The Movie). In Japanese media, the blow is often accompanied by the sound of a bell.

Effectively, this is a human's version of Attack Its Weak Point for massive damage. A subversion of this is Balls of Steel, where a character — for whatever reason — does not take damage from a Groin Attack (or at least doesn't take extra damage).

Note that in Real Life situations, this kind of attack can often be far less effective than fiction will usually present it. In a real fight, many people will exhibit drastically reduced sensitivity to pain due to adrenaline, and actually may not even notice being struck between the legs. In addition, some people tend to overly telegraph their movements before using this attack, giving the opponent time to block or shield themselves from it. This will be even more so if they are on drugs or in some psychotic state, as criminals dispatched with this method in fiction often are.

For some reason, this usually only applies to men. Female characters are rarely subjected to groin attacks of any kind, and when they are, they are also likely to just shrug off in a moment.note While the female genitals are better protected than their male counterparts, the female groin area itself is full of nerve endings and sensitive skin tissue that, when hit, while maybe not as painful as it would be on a man, will still be quite debilitating

. Female genitals also lack the squish factor that comes from swinging in the wind. On the symbolic level, a groin attack on a male — especially if it's delivered by a female — represents that male being brought low by a well-placed blow to the very source of his masculine pride.

In contrast to most groin attacks, groin attacks that draw blood or involve some form of mutilation are very likely not to be played for comedy — and owing to the Primal Fear of bad things happening to our nether regions, particularly nasty attacks of this nature can be downright disturbing. Apart from being a hallmark of the Lust variant of the Serial Killer, this form of attack is most often used as either a particularly vicious form of Cold-Blooded Torture or as a way for Antiheroes to punish rapists and other sexual criminals, though a particularly vicious Combat Pragmatist may also use this tactic as just one more way to even the score or gain the upper hand in a fight. It may still come off as funny, though, if the guy is perceived as having brought it upon himself, such as having his gun go off in his pants. See Crippling Castration for examples of groin attacks that lead to the unfortunate victim losing his organs/the ability to procreate.

Along with Taser Tag Weakness, the Groin Attack also seems to be very effective against Superheroes and Supervillains, although some of them are immune.

Compare Freudian Threat. For certain kinds of groin injuries (actual or threatened) specifically related to sexual encounters, see both Vagina Dentata and Man of Steel, Woman of Kleenex. Also see Standard Female Grab Area (which is not the same area, instead being the upper arm). Eye Scream, Fingore, and The Tooth Hurts are other primal fear reactions. The Distaff Counterpart to this trope is Breast Attack. Often utilized by a Combat Pragmatist, and commonly followed up by Instant Soprano and/or Share the Male Pain. Not an uncommon aftereffect of Tar and Feathers. May be used as part of a "Balls" Gag, though the overlap is smaller than one might think. Near-Miss Groin Attack is when an aversion of this trope is Played for Laughs.

WARNING, Reading these may cause extreme paranoia about injury to the pubic area and wincing in sympathy pains. Yes, even if you're female. Also, this is never as funny in Real Life as it is on TV and can actually cause very nasty injuries, so unless you are in a real self-defense scenario, Don't Try This at Home.

The Sword of Uruk

The Sword of Uruk