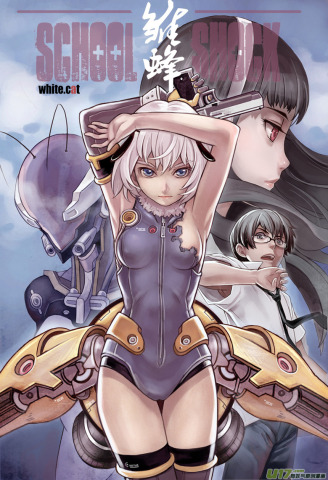 The year is 2017note 2020 in the first animated adaptation, 2027 in the Son of Eden adaptation. Sun Haoxuan, an Ordinary High-School Student, goes about his peaceful life, observing that everyone, including him, is doing the same thing everyday, and those who change merely replace others. Although he wants a girlfriend, he perceives himself to be inferior and having no redeeming features. Therefore, he contents himself with his normal, repetitive life and comes to the conclusion that life has nothing to look forward to.

That is about to change when his building is overtaken by heavily armed terrorists. They quickly take out police units sent in to get them and demand an artifact/person called the Child of Eden. If the police take their time, they will kill a hostage every ten minutes. Haoxuan turns out to be the first to be shot. Luckily for him, he is saved by a mysterious girl who wears a strange device that resembles a bee's posterior and allows flight, as well as an accessory that resembles a bee's antenna. She turns out to be a new human weapon called a Vanguard, made by putting nanomachines into a human, greatly enhancing his/her physical abilities and reflexes. The girl, Liu Li, quickly suppresses the terrorists and returns to her base.

That's not the end of the two protagonists' relationship. Liu Li turns out to be a Vanguard who's almost at her limit, and she has to take drugs every day to keep herself alive. These drugs are prohibitively expensive however, hence the military generals decide to "let her rest". Her instructor, Colonel Li, objects to this, and begs them to let her to live a normal life for another year like they had promised before. The generals are unwilling to keep their word, since they see her as a mere machine which has outlived its purpose. They're willing to compromise however, by letting her live if Colonel Li assigns her a new mission. The promised normal life is not possible, but Liu Li does not want it anyway; she has never had any conception of a normal life, and her "raison d'etre" has always been to finish a mission. Yet, Colonel Li still tries to give her a normal life, by assigning her to protect Haoxuan, who, like all ordinary high-school students we've seen in anime, turns out to be not as ordinary as he seems, as he appears to be the Child of Eden. Liu Li is hence transferred into Haoxuan's school and acts as a normal student, and so, the manhua's title is finally justified. Sadly for Liu Li however, her normal life turns out to be short-lived, as new enemies have appeared, and they also seem to believe that Haoxuan is the Child of Eden they are looking for.

An animated adaption began airing on July 23, 2015 for 6 episodes under its Chinese title. Full episodes are available on the U17.com official Youtube channel.

A Japanese dub premiered on August 15, 2015 starring Shinnosuke Tachibana, Kana Hanazawa, and Fumiko Orikasa as the main characters. The Japanese-dubbed episodes can also be found on U17.com's Youtube channel here

. It is the first Chinese-made animated series to be broadcast simultaneously in China (in Mandarin) and Japan (in Japanese).

The animation was set to have a movie sequel in 2017

but this ended up not panning out. In 2019, a trailer was released for a second animated series titled 雏蜂伊甸之子 Chu Feng: Son of Eden. This new series began airing on November 18, 2020, and restarts the story from the beginning while aiming to be a more complete adaptation. Notably, Sun Heng himself was deeply involved with its production, and Son of Eden was a far more serious take on the story compared to both the 2015 series and the original manhua. Unfortunately, the series was apparently Cut Short after only airing 12 episodes and still remains far from a complete adaptation.