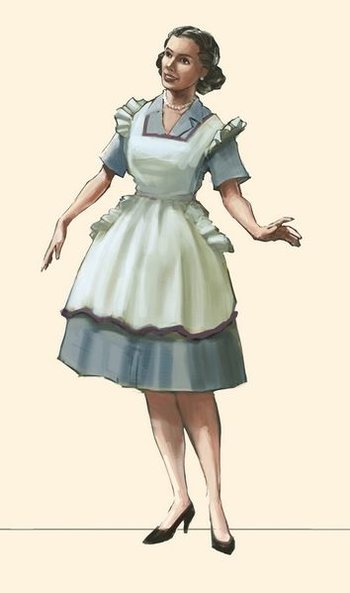 "The love for her husband is deep
She would often do things for her husband
Without ever asking him anything in return
or even expecting him to know what she has done for him
However, long she has been married to her husband,
she treats him with respect and tenderness
And she always dresses herself neatly and pleasantly,
but never extravagantly, nor vulnerable, nor Gucci or Versace
My kind of women, housewives."
— "Housewife/The Conversation" by Daan
Advertisement:

Housewife is a term used to describe a married woman who stays at home to personally raise her children and take care of their needs. This is often the "traditional" role of women—at least until her children (assuming she has any) are old enough to be in school for most of the day (usually once they start preschool or Kindergarten). "Homemaker" is a mainly American gender-neutral synonym for either spouse doing this—"stay-at-home mom" is another term, but a housewife and stay-at-home mom aren't always the same thing.

She's often a stock character in Dom Coms who can generally be identified by being in the kitchen and lovingly counseling her children because she is The Heart of the family. There will probably be reference to her doing laundry, grocery shopping, cooking, household cleaning, chauffeuring, managing the family finances, sewing, and bugging her husband for Jewelry and a mink coat. Her children and husband usually appreciate what she does. And of course, since Beauty Equals Goodness and Men Are Strong, Women Are Pretty, she will never slack off on her looks, no matter what her busy schedule may demand. Her hair is always perfectly done, she never has any blemishes, unwanted hair, or wrinkles, and she will often be wearing a dress, high-heeled shoes, and pearls for even the most mundane tasks. And no matter what, she never becomes tired or stressed, even when she's the only one keeping the household together.

When a Close-Knit Community is the setting for Free-Range Children, she is part of why it is safe — any child who comes to her door stands a good chance of getting support, help, a sympathetic ear, or maybe just a cookie. With a good man at her side she's far from a case of Meekness Is Weakness.

Sometimes crosses with Extreme Doormat, which is culturally neutral and describes someone who lets everyone 'walk all over them'.

Naturally, this is far less common in newer (ie. 1990's onward) works than in older works. However, the archetype is still used often enough that it has not yet become a Discredited Trope. It is also, at least, Truth in Television if the woman decides to be a stay-at-home mom.

Compare Yamato Nadeshiko (a Japanese cultural ideal where a woman runs the household with a gentle expertise and touch of iron), House Husband (when a man takes the role of homemaker, much to the utter surprise of pretty much everyone in popular media).

Usually the wife of the Standard '50s Father, and mother of the Girl Next Door and The All-American Boy. In more modern stories, she may be the wife of the Bumbling Dad, who spends all her days not only taking care of the house and kids, but Parenting the Husband as well.

Important Note: Just staying at home alone does not make a character a Housewife. If her interest in staying at home doesn't include homemaking and/or children but living off her spouse's paycheck to enjoy a life of luxury, she's NOT a housewife, she's a Gold Digger.