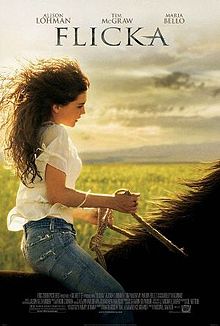 Katherine "Katy" McLaughlin (Alison Lohman) has big dreams of administering her father's Wyoming horse ranch one day, but her father, Rob (Tim McGraw), has other plans for his daughter. He is currently grooming her older brother, Howard (Ryan Kwanten), to take over the ranch and sends Katy away to an exclusive private school where she constantly feels like a misfit. Being a similar, independent spirit to Katy, Rob has a hard time understanding his daughter as she continually defies his authority to follow her own path.

When she comes home for the summer, Katy is instantly met with her father's disapproval because she did not finish a writing assignment on one of her finals, but is happily greeted by her mother, Nell (Maria Bello), and Howard. As much as Katy wants to run the ranch, Howard does not. He longs to attend college, but has a hard time telling his father because he does not want to disappoint Rob.

One day while out riding, Katy finds a wild mustang, a beautiful jet black mare. Katy feels an instant connection with the horse, seeing how similar they are in personality. She sets off to tame the mare, which she names "Flicka" (the Swedish word for "girl"), despite Rob's protests that he does not want a mustang near his horses, feeling it will cause nothing but trouble.