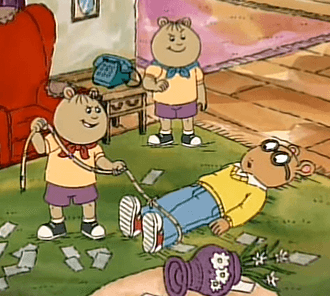 "How did I get roped into hanging out with these two?"
"We'd play pranks all the time! That's what you do as twins!"
— Daniel Bronstadt, This Sounds Serious
Advertisement:

Woe to the fictional parents of the Trickster Twins. They are a set of siblings (not necessarily twins, but often are) that are always up to no good in pursuit of sadistic delight. They are a magnet for trouble (either attracting it or causing it) and have to find a way through a series of convoluted plans to escape the situation.

The traits most common to a set of Trickster Twins is that they're pranksters or entertainers. Their antics are usually for comic relief, but other times, their tricks can be far more sinister. Trickster Twins also tend to have the good-natured compulsion to pick on or tease the rest of the cast. If they target a single character out of the entire cast, that victim is usually the Butt-Monkey.

They are fond of the Twin Switch.