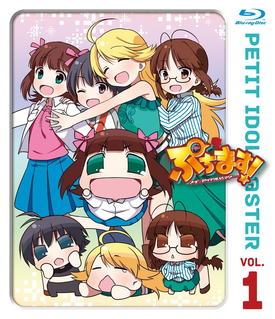 Petit iDOLM@STER (shortened Puchim@s!) is a manga spinoff of the The iDOLM@STER franchise, published by Ascii Media Works. It is written and drawn by Akane and began serialization in Dengeki Maoh in 2008, where it is still ongoing.

It received an 64-episode anime adaptation by Gathering and Asahi Production, in the format of anime shorts, in the Winter 2013 Anime season, with a second season airing in Spring 2014. Both seasons are simulcast by Funimation.

The comic revolves around the daily lives of the Idolmaster cast...and mysterious creatures that look like Super-Deformed versions of said cast.

For character tropes, please refer to the character sheet.