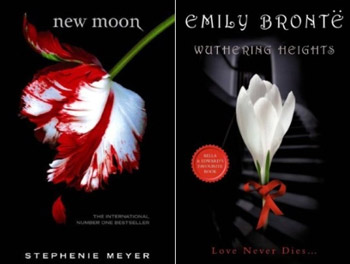 One book or movie becomes a phenomenon. Next thing you know, practically every book or movie of an even remotely similar genre gets a cover or a poster that takes the design motif of the phenomenon's. This isn't just new books or movies either. Sometimes old books or movies get a re-release (in the case of movies this means a new DVD) with a new cover that does this.

Sometimes, this is a good thing, bringing new attention to a work that deserves it. More often, it's just pointless.

Distinct from just pure homage, where the cover is deliberately designed to make the viewer think of that specific work — this is a marketing thing. Also different from tie-in covers, which exist to let movie-goers know that the thing they saw was based on a book. (Even Twilight got those, for some reason.)

See also: Copycat Cover, which is this trope taken to the point to quasi-marketing fraud.

◊.
Harry Potter-inspired examples
Cover of a slightly stylized pastel portrait of the hero with the title in a fantasy-ish font superimposed

◊.
Advertisement:
The Da Vinci Code-inspired examples
A cover that looks as if it has a strip ripped away to reveal a secret document/scene, calligraphic fonted title optional.