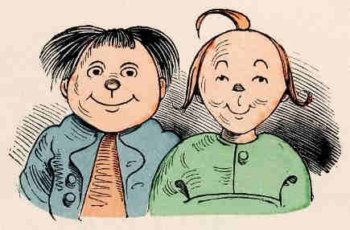 Ah, how oft we read or hear of
Boys we almost stand in fear of!
For example, take these stories
Of two youths, named Max and Moritz,
Who, instead of early turning
Their young minds to useful learning,
Often leered with horrid features
At their lessons and their teachers...
Advertisement:

Max and Moritz: A Rascals' History in Seven Tricks is a German children's book of 1865, written and drawn by Wilhelm Busch. Like the rest of Busch's work, it is a combination of sequential drawings and rhyming verses and a forerunner of comic strips.

Max and Moritz, two naughty boys or should we say, young sociopaths subject the good citizens of a German town to a crossfire of cruel pranks. One after another the Widow, the Uncle, the Teacher, the Tailor, and the Baker fall prey to their rascally crimes, until the delinquents find their master in a crafty Farmer and their reign of terror comes to a surprisingly final end.

Max and Moritz was a 19th century bestseller and spawned a train of parodies, pastiches and imitations. Its probably most successful derivate are The Katzenjammer Kids.

As Max and Moritz is Wilhelm Busch's most well-known work, the most important German comics award is named after it. The Max-und-Moritz-Preis has been awarded every two years at the International Comic Salon in Erlangen since 1984.

A roller coaster ride based on the book opened at Dutch Theme Park Efteling in June 2020.

You can read it online (translation and original) here

Tropes in Max and Moritz: