Anime / Adventures of the Little Koala 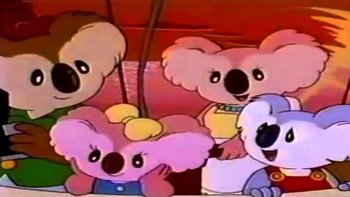 An anime from The '80s, originally titled Koala Boy Kokki in Japan, depicting the day-to-day adventures of Roobear, his family and his friends in a village somewhere in Australia. Originally airing on TV Tokyo from 4 October 1984 to 28 March 1985note  As the TX network included only three affiliate stations at the time - TV Tokyo, TV Osaka, and TV Aichi in Nagoya - the show aired on Fuji TV, NTV, TBS or TV Asahi affiliates in other markets., it was one of the last works animated by Topcraft before the studio's closure and integration of most of its staff into Hayao Miyazaki's Studio Ghibli, just a few months after the studio participated in the production of Nausicaä of the Valley of the Wind.

Like The Noozles, it was made as the result of a koala craze. In 1984, the Tama Zoo in western Tokyo welcomed its first koala, and the government of Australia sent six koalas to Japan as a token of goodwill. These koalas induced a huge craze among the Japanese for anything koala-related (such as merchandise). Also like The Noozles, Adventures of the Little Koala ran on Nickelodeon from 1987 to 1993. In Canada, the English version aired in a Saturday morning timeslot on Global circa 1990. The English and French dubs were produced in Montreal by Cinar Films.

Roobear, a smart and athletic koala, had various adventures along with his sister, Laura, and his many friends. Among them were his love interest Betty, brother/sister pair Floppy and Mimi Rabbit, brother/sister pair Nick and Pamie Penguin, aspiring photographer Kiwi, and sugar glider Mingle.