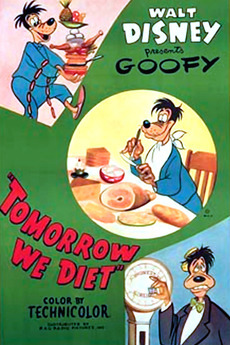 A character is sneaking out to the kitchen for a midnight snack. He is careful not to wake up his wife or else he'll get caught. The minute he opens the refrigerator, he suddenly hears footsteps, so he turns around just in time to see his wife standing behind him with a stern expression on her face. The wife then promptly puts her husband on a diet for trying to raid the refrigerator at night.

This is a type of episode that shows up in almost every form of media. When a character is caught trying to eat more than he usually does, he will promptly be put on a diet, or the character decides to go on a diet himself.

Growling Gut trope may be applied for comedic effect and may also overlap with Vegetarian for a Day.

Becoming a Dead Horse Trope as the obese become Less Acceptable Targets. Losing weight is hard and keeping it off is even harder. Not to mention plenty of health professionals have realized that starving yourself excessively is one of the least effective ways to get into shape; a modern medium that plays this shamelessly straight fears complaints from Moral Guardians about promoting risky behaviour. Could lead to A Weighty Aesop or a Missed Meal Aesop.