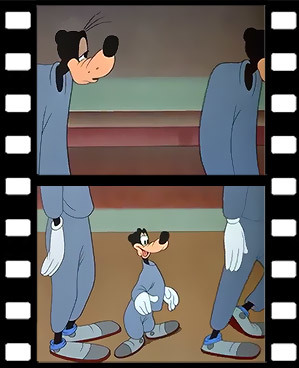 "Once I acquire the power of the sun, I — [to the cameraman] Down here, you fool."
— Wannabe Evil Genius, ad for Sunny Delight

In a show with a comparatively small character, whether they be a gnome, a dwarf, a hobbit, or just very small, a common gag is to have the camera show some nice scenery, and then Tilt down to reveal the character standing there, possibly giving the camera a weary look.

It can also be done through not directly involving the camera (or other spectator viewpoint), but by having a character missing said midget and having to look down, usually when hearing "Down Here!" Or sometimes, by mixing the two.

Expect Forced Perspective when these characters aren't actually played by actors with dwarfism.