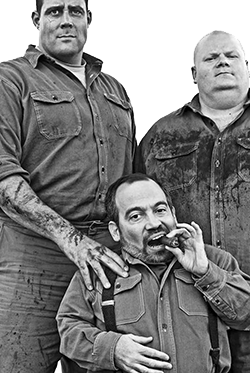 Since Asskicking Equals Authority and Authority Equals Asskicking, your average Big Bad tends to be (appropriately enough) big — however, a frequent subversion of this is for the big cheese to be a half-pint. Generally this will be taken to an extreme degree, and may be accentuated by giving him two Giant Mook bodyguards.

Almost invariably The Napoleon, with a Berserk Button about their height. Or they might have an Ironic Nickname along the lines of "Mr. Big" — either they're too dumb to notice the irony, their minions are Professional Butt Kissers stroking their ego, or they're confident enough to have a self-deprecating sense of humor. This might be a reference to their sizable reputation and influence, combat skills, or personality. Often got their position due to intelligence or deviousness that compensates for their lack of physical threat — if Shorter Means Smarter, this guy is a genius.

Will often be introduced with a Big Little Man, Hitler Cam, or Big Shadow, Little Creature shot, either as a simple Visual Gag or because his shortness will eventually be The Reveal.

Contrast Large and in Charge. Compare Killer Rabbit, Pintsized Powerhouse, and Depraved Dwarf (and indeed, this trope often overlaps with those ones). Has nothing to do with rock band Mr. Big or the James Bond adversary or the Southtown kingpin or the final boss of NARC or the character from Sex and the City. ...Or the Canadian candy bar.