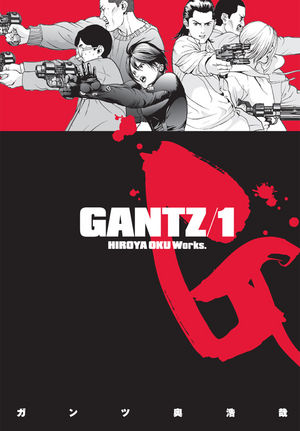 "Your lives have ended. What you do with your new life is entirely up to me. That's the theory anyway."
— Gantz itself
Advertisement:

Imagine the bastard offspring of the wanton gore and nudity from the 1990s OVAs with Doom's disturbing nature and Warhammer 40,000's outright insanity. Put that on crack and toss it in a septic tank. Finally, throw some heavy social commentary in to justify it all. That's GANTZ.

GANTZ is a Sci-Fi Horror action series by Hiroya Oku. As it begins, Kei Kurono, a rather unpleasant teenage student, is run over by a train after he and his childhood friend Masaru Kato rescue a hobo from the rails. Instead of being dead, Kurono finds himself trapped in a small apartment along with Kato, a bunch of weird people (including a hot naked girl, a dog, and a middle-school boy who seems to be the only one who knows what's going on) and a mysterious large black sphere.

The sphere begins to sing an exercise song, and explains the situation: they were dead, but "Gantz" note  an experienced character points out that that's what the sphere's "always been called.", not knowing where the name came from gives them a mission: to hunt down and kill a strange alien creature. The rules are easy: they have one hour to complete the assignment. Any injuries that they sustain during the mission will be fully healed upon completion of the task. So long as they're alive, they will be summoned back to the room in a healthy and fully restored state. But if they die before the mission is over, then they'll remain dead. If they stray too far outside the allowed boundaries of the mission area, they will die. After the mission Gantz will score each participants' performance by assigning points. When any hunter reaches 100 points, they are presented with the "100 Point Menu", from which they get to choose one of three different rewards: Be freed from the "game" with all their memories of it erased, be given an extremely powerful weapon, or choose to revive one human from within Gantz's memory bank. With all that said, Gantz gives them high-tech battle suits and some futuristic equipment and armament and launches them into the mission.

Essentially, the first nine volumes (and the whole anime series) consist of (seemingly) senseless killings of a gory, horrific nature as the Gantz ball assigns different aliens for the hunters to hunt; Fanservice; and sex scenes. The manga began to improve when Kurono was given a romantic interest and impressive Character Development. Then "vampires" are introduced, secrets are revealed, and things become truly weird and extremely convoluted. The fights also become longer and longer, to the point where they seem interminable.

In the manga's third phase of the story, things all over the world become horrifically worse for everyone. Oku had planned to end the story in 2012, but it ultimately wrapped up on June 15, 2013.

A two-part live-action Japanese movie adaptation was released in the winter and spring of 2011. A CGI film, GANTZ:O, was released in 2016, covering the events of the Nurarihyon Seijin arc of the manga which takes place in Osaka.

A three-volume spinoff manga, GANTZ:G, was released in 2015. It's stated to be a parallel story taking place around the same time as the original story, albeit this time featuring a group of primarily female Ordinary High School Students as the protagonists (hence the "G," for "Girl" or "Girls"). This series has virtually none of the sexual exploitation of the original series and focuses more on character development. A historical spin-off, Gantz:E, takes place in the Edo period.