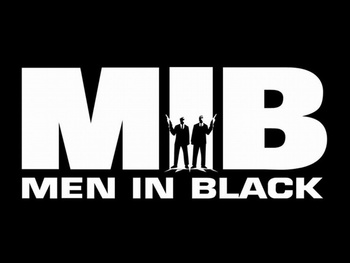 K: We are the best kept secret in the universe. Our mission is to monitor extraterrestrial activity on Earth. We are your best, last, and only line of defense. We work in secret. We exist in shadow.
J: And we dress in black.
—The introduction to the "Men in Black" music video by Will Smith.
Advertisement:

Men in Black is a media franchise about The Men in Black helping to protect the people of Earth from alien visitors passing by or living on the planet — and vice versa.