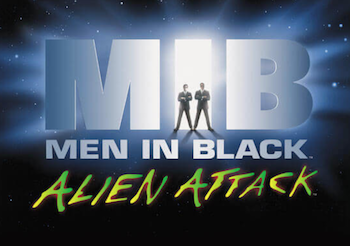 "That kind of shooting is not gonna get you a suit! Let's go, let's go!"
— Agent J
Advertisement:

Men in Black: Alien Attack is an interactive dark ride that is found at Universal Studios Florida. The premise of the attraction follows the story of the original Men in Black film, where the organization is looking for more recruits to add to its ranks. Both Will Smith and Rip Torn reprised their roles for the attraction, and Steven Spielberg served as a creative consultant.

Guests first enter what at first appears to be a World's Fair pavilion called "The Universe & You", but in the middle of the presentation see that it's just meant to be a disguise for the MIB headquarters. The guests are then taken into an elevator, and into the heart of the organization's operations where they are brought up to date on information regarding extraterrestrial activity, as well as getting briefed on their training.

After viewing an instructional video on the training called, "Doofus and Do-Right", guests are seated in vehicles that are equipped with interactive laser guns and get sent into training. Not too long after it starts, the training is interrupted when an alien invasion breaks out in New York City. The riders are forced into battle, where the goal is to blast away the aliens and earn as many points as possible. Along the way, they are pitted against an opposing vehicle and later on stumble upon a gigantic alien, which they are forced to press the emergency "red button" on the vehicle to deal with. The ride's overall outcome as to whether or not the guests achieve the rank of an MIB agent all depends on how well they score.

Development of the ride had begun immediately after the release of the original movie in 1997, when Universal saw the perfect ride potential in it. Early online insiders began spreading word of the attraction as soon as late 1998; and planning documents that were filed in 1999 describing the new attraction as an "alien-themed laser tag ride" had only further let the cat out of the bag. Universal officially announced the ride in October of 1999, a mere few months before it had its grand opening on April 14, 2000.

Built on a budget of $70 million note which by today's inflation would be somewhere near $110 million, the attraction was at the time the biggest dark ride Universal had ever built, covering a space of 70,000 sq ft. It was also a record-breaker for Universal in terms of how many animatronics it contains: a whopping 127.

The attraction received lavish praise upon its opening for its sheer inventiveness, with it receiving a "Thea Award for Outstanding Achievement" by the Themed Entertainment Association. Although it is no longer being used in advertising, the attraction to this day is still viewed by many fans as being an Ensemble Dark Horseinvoked of the park, with most agreeing that it was way ahead of its time.

Despite the attraction's success, it is notable for being one of the few Universal attractions that has never been cloned to any of the other parks around the world.

"That was pretty hot, wasn't it? Too bad you're not gonna remember any of it."