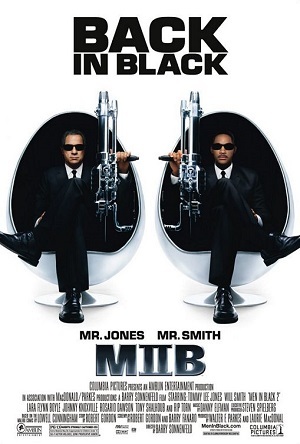 Men in Black II (stylized MIIB) is a 2002 American science fiction action comedy film starring Tommy Lee Jones and Will Smith. The film is a sequel to the 1997 film Men in Black and was followed by Men in Black 3, released in 2012.

With K officially retired (with his memory wiped and civilian identity restored) J has been working overtime as the top field agent of MiB. A powerful and malevolent alien named Serleena returns to Earth looking for "The Light of Zartha," which is tied to a case K was involved with back in the '70s. To get the information they need, they reinstate K and get back to business.

Much like the first movie, Will Smith released a tie-in music video entitled "Black Suits Comin' (Nod Ya Head)".