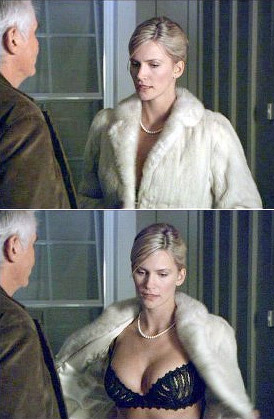 She just "forgot" the rest of her clothes.
"But before I go, I want to show you my new blouse. [opens coat] Oops, I'm not wearing a blouse."
— Nikki, Just Shoot Me!
Advertisement:

A woman (or occasionally a guy) is wearing a coat or similar covering, until she is talking to someone she wants to sleep with, or at least distract. Then she opens up and/or drops her covering to show that she's wearing nothing, or next to nothing, underneath. It doesn't matter what the cover is (a trenchcoat, a fur coat, or even a cardigan), or what is worn underneath (underwear, a swimsuit, or nothing at all), just so long as nothing else is being worn between them.

Now often this works, but just as often it can fall flat, especially if it's a guy trying this, in which it may be Played for Laughs.

Depending on the clothes, this can overlap with Of Corsets Sexy, Diamonds in the Buff, Naked in Mink, Going Fur a Swim, Sexy Discretion Shot, Distracted by the Sexy.

A Sub-Trope of Ready for Lovemaking.

A Sister Trope to Dress Hits Floor (although they don't overlap except in rare instances that she insists on calling her coat a dress).

Not to be confused with just lifting your shirt or blouse, or with being a flasher in general — the one committing the act should be wearing a heavier outer garment to make a visual contrast between that and the fact that there's too little being worn beneath it.