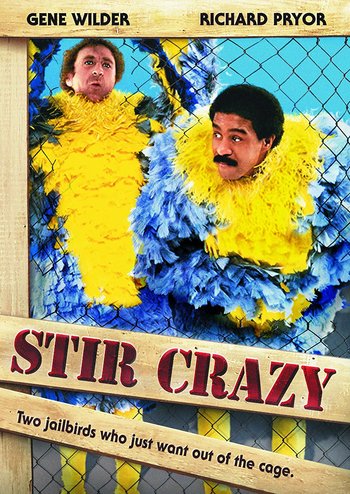 Skip: What are you doing?
Harry: I'm gettin' bad. You better get bad, Jack, 'cause you ain't bad, you gonna get fucked!
Advertisement:

Fed up with living in New York City, struggling playwright Skip Donahue (Wilder) and his best friend, out-of-work actor Harry Monroe (Pryor), decide to drive to sunnier, friendlier Los Angeles. They end up getting framed for a bank robbery in Arizona and are sentenced to state prison for 125 years! While waiting for their appeal, Skip and Harry must get through mean guards, an overly friendly gay convict (Georg Stanford Brown), and a scary, bald behemoth named Grossberger (Erland Van Lidth). When the corrupt warden Beatty (Barry Corbin) sees that Skip is the only prisoner that can ride his mechanical bull at full power, he tries to force him to participate in the annual rodeo competition.