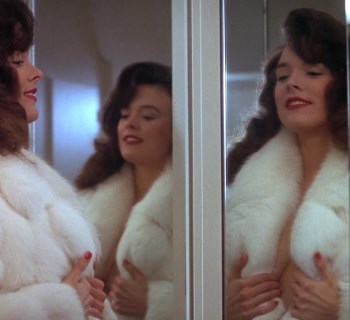 "I wore this for you, Mr. Senator. Look what I didn't wear!"
"And I started thinking about what would be 'awesome' for Bill Engvall? What would leave me in awe and wonder? And it would have to be if I left this stage tonight and went back to my hotel room. And Shania Twain met me at my door, wearing nothing but a fur coat, holding a note from my wife that said 'have a good time.' That would be awesome!
[Beat]
It ain't gonna happen, but that would be awesome."
— Bill Engvall
Advertisement:

Going out naked is embarrassing, and could get you arrested. Well if you have nothing else handy, a fur coat, wrap or cape will do. It's stylish, covers up all the naughty bits, and is great fanservice.

Yet, this is quite often a deliberate seduction move, combining with Ready for Lovemaking. Why is this such a turn on? Rule 34, of course. And in many ways it's better at implying actual nudity than a thong bikini (but not a wet T-shirt).

And not even a full coat is necessary. In the early days of Hollywood, glamor shots would often have an actress wear a fur wrap, and be shot in a way that looks as though she wore nothing else. For some reason, the Hays office allowed it, probably because they weren't actually naked. But the allusion in those is still clear.

Sometimes this is a ploy to distract one's husband from the fact that a fair chunk of the family finances were just sunk into this fur coat.

Yet other times, there is no seduction, and the fur coat is just an emergency cover up, just often a sexy one.

Now this trope doesn't count if you actually see any nudity. Then it's just a nude shot with the fur as an accessory.

Compare Fur Bikini, Godiva Hair (hair instead of fur), Naked Apron (which is something similar with a cooking apron), Modesty Towel (ditto with a towel), Cleavage Window, Diamonds in the Buff, Going Commando.