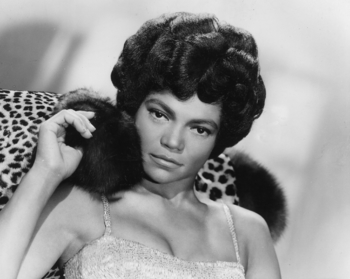 "The audience has always been my best director."
Advertisement:

She began her career in 1943, joining the Katherine Dunham Company, who toured worldwide. When the company eventually returned to the United States, she chose to remain in Paris as a nightclub singer. It was here that she was discovered by director Orson Welles, who gave her her first leading role as Helen of Troy in his play Doctor Faustus in 1950.

From there, Kitt became a regular on Broadway, and recorded many of her notable songs, with perhaps her most famous being the Christmas standard, "Santa Baby." Kitt's most famous TV role is the Catwoman in the third season of Batman (1966), where she wasn't allowed to have the established underlying sexual tension with the white title character, but infused an appealing cat-like slinkiness to her role.

Things came to an abrupt stop in 1968, however, when, during a visit to the White House, she made several statements opposing The Vietnam War. The incident led to her being blacklisted in the United States, and she was relegated to touring in Europe for the better part of the 1970s.

Her career was eventually revived after a starring role in the 1978 musical Timbuktu, for which she was nominated for a Tony Award. She would continue to sing and act until her death from colon cancer in 2008.