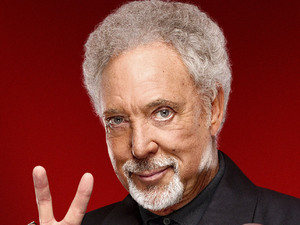 The man... the myth... the legend. Tom Jones is one of the biggest, most influential singers and musicians ever to come out of the British music scene. You've felt his influence, even if you never realized just how huge he really was.

Since the 1960s, Sir Thomas John Woodward, OBE (born 7 June 1940 in Pontypridd, South Wales), better known by his stage name "Tom Jones" ...or these days, "Sir Tom Jones"... is a Welsh singer. He became one of the most popular vocalists to emerge from the British Invasion. He is a true musical polymath, having recorded songs in nearly every genre of popular music (pop, rock, R&B, punk, show tunes, country, club music, techno, soul, gospel, blues, and rap). Jones has sold over 100 million records, and has almost forty Top 40 hits to his name, including "It's Not Unusual", "What's New Pussycat", "Delilah", "The Green Grass of Home", "Kiss" (a cover of the Prince classic that actually outsold the original), "Burning Love" (a cover of the Elvis Presley classic), "Sex Bomb", and the song that has become his signature, "She's a Lady".

Jones has a powerful, bluesy baritone voice that is reminiscent of Elvis Presley (one of Jones' personal friends, as it turns out). His voice is versatile enough, however, to handle pretty much any type of music he decides to apply it to. He's a legendary Pornomancer whose singing would regularly cause women to throw articles of clothing at him while he was onstage.

Tom Jones has contributed to the soundtracks of over 130 different productions (including television, films, plays, cartoons, and even video games), and has been known to occasionally act (usually either as himself or in bit parts). He has hosted three variety series. The first, This Is Tom Jones (1969–71), was jointly produced by ATV and ITC. ATV broadcast it in the UK, with ITC exporting it to the States, where it aired on ABC. The second, Tom Jones (1980–81), was produced in Canada for North American broadcast syndication and exported to the BBC, where it was broadcast from 1980 to 1982 as The Tom Jones Show. Finally, in 1992, he hosted Tom Jones: The Right Time, which had a (planned) six-episode run on ITV and was exported to the States for VH1. Since 2012, when not out there rocking the stage at age 80 (before COVID-19, he still played about a hundred shows a year), he's been a coach on the British version of The Voice (he has taken two contestants to the championship—Leanne Mitchell in the first season, and Ruti Olajugbagbe in the seventh). Jones and the producers had differences that led to his departure after the fourth series (season) in 2015; fans reacted very negatively to his departure, and he was brought back after a one-season absence. The other coaches apparently consider him to be "the man to beat" on the show because of his vast experience and know-how. And even in his eighties, he apparently still has it, with his 2021 cover album Surrounded by Time debuting at #1 on the UK album charts, making him the oldest male artist to have a UK #1 album, and drawing substantial critical praise. That album also made the Billboard 200 in the States.

Over the course of his career, he's received four Grammies, an MTV Video Music Award, two Brit Awards, and was knighted (the Order of the British Empire) by Queen Elizabeth II for "services to music".

Despite his own admitted "horde of infidelities" (including one that resulted in an illegitimate son, whom he barely acknowledges), Jones stayed married to the same woman, Melinda, from 1957 until her death in 2016. The couple has one son, Mark, and carefully do not mention Tom's other son. These days Tom splits his time between Los Angeles and London.

Tom Jones's songs and his music provide examples of the following tropes:

"Well, it sounds like you’ve got Tom Jones Syndrome."