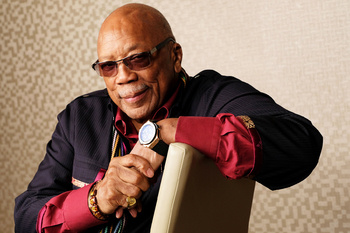 Quincy Delight Jones Jr. (born March 14, 1933), also known as "Q", is an American record producer, composer, and musician. Born in Chicago, he started out in jazz and got his big break in film scores, starting with The Pawnbroker. Among the films he's scored include In Cold Blood, In the Heat of the Night, Cactus Flower, The Out-of-Towners, The Color Purple, and many more. During this time period he started branching out into collaborating and arranging with the day's biggest artists, including Frank Sinatra, Count Basie, Dizzy Gillespie, Duke Ellington, Miles Davis, Sarah Vaughan, Dinah Washington... it would almost be quicker to list great musicians he hasn't worked with. One of his longest and most-publicized collaborations was with Michael Jackson, which started with The Wiz. Jones would go on to produce much of Jackson's following discography, including the famous "Thriller".

He has some surprising connections in the music world. In particular, his Warner (Bros.) Records imprint, Qwest, was the U.S. distributor for English Alternative Dance band New Order (and its predecessor Joy Division) from 1985 until the label's initial closure in 2000. Jones, a fan of the band, caught onto their growing popularity among urban black listeners in the 80's, with their 1983 single "Confusion" being especially popular among breakdancers, and scored a deal with the Manchester quartet to give them far greater levels of US distribution than what they had previously received on the comparatively small American branch of Factory Records. Jones also produced the 1988 remix of the band's Signature Song "Blue Monday", gushed about the band in the 1993 NewOrderStory documentary, and supervised the production of the 1995 US release of the Greatest Hits Album (the best of) NewOrder (which was given a significantly different tracklist than the 1994 British release to make it stand out more from their earlier compilation Substance, which was still in print at the time).

Another fairly leftfield connection of Jones' (at least to modern audiences) is with actor and rapper Will Smith. Jones, who served as the executive producer of and musical composer for The Fresh Prince of Bel-Air, met Smith at a house party in 1989 and suggested that he audition for the show based on a junked spec script for a pilot that would've starred Prince associate Morris Day. Smith had already been suggested to appear on the show by co-creator Benny Medina, but was reluctant to take up the role due to his lack of acting experience; it was Jones' recommendation that encouraged Smith to audition for the show, which in turn led to the rapper becoming one of the most famous black TV actors since Bill Cosby, paving the way for him to become a major Hollywood actor independent of his music career. So if there's anyone to thank for Will Smith's acting fame, it's Quincy Jones.

All in all, Jones's career has spanned over sixty years, and a record 80 Grammy Award nominations (with 28 wins).

Jones has seven children, a few of whom are famous in their own right — his son with Ulla Andersson (also named Quincy) is also a record producer, and his daughters with Peggy Lipton, Rashida and Kidada, are actresses. He is the topic of Rashida Jones's Grammy-winning documentary, Quincy.

Tropes in his music: