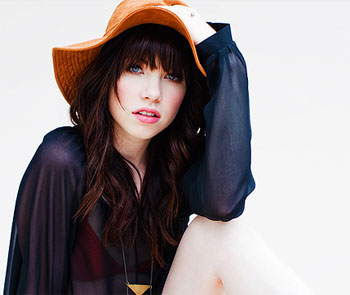 Hey, she just met you.
"Hey, I just met you
And this is crazy
But here's my number
So call me maybe"
Advertisement:

Carly Rae Jepsen (born November 21, 1985) is a singer-songwriter from Mission, British Columbia of Anglo-Danish descent. In 2007, she entered the fifth season of Canadian Idol and ended with a third-place finish, and would go on to release her debut album, Tug of War, to mild success in her native Canada. Three years later, however, Jepsen skyrocketed to fame when her single "Call Me Maybe"

was praised by both Justin Bieber and Selena Gomez on Twitter, propelling her onto the world stage.

"Call Me Maybe" would go on to reach #1 in nineteen countries (including the USA and Canada) making Jepsen the best-selling female Canadian artist since Avril Lavigne released "Girlfriend" in 2007. She's also the best-selling Canadian Idol contestant in terms of singles, as well as the only one popular outside her native Canada. It became the very definition of a viral hit, spawning dozens upon dozens of parody videos and celebrity covers over the summer of 2012. No matter where you went or what you did, at one point or another, you knew all the lyrics to "Call Me Maybe".

. Jepsen went on tour with Justin Bieber in 2013 to promote her new album, Kiss.

In February 2014, she made her acting debut as the title character in the Broadway version of Cinderella (Rodgers and Hammerstein), and in March the next year released her comeback single "I Really Like You"

quickly became a Memetic Mutation for depicting Tom Hanks lip-syncing the song while going on his typical day. In August 2015, her second album E•MO•TION was released to disappointing sales but massive critical acclaim, with second single "Run Away with Me" being particularly praised. Jepsen also provided the vocals for "Everywhere You Look"

, the rearranged theme song for the Netflix show Fuller House, which premiered on February 26, 2016. The same year she took on the role of Frenchy in Grease: Live.

Here's my number, so trope me maybe: