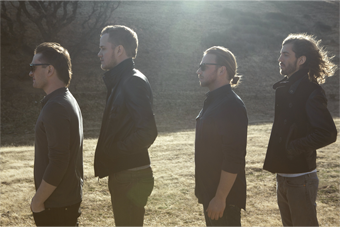 Welcome to the new age! note Left to Right: Dan Platzman, Dan Reynolds, Ben McKee, (Dan) Wayne Sermon
"Above all, we try to write music that helps people cope with what can be a very hard life at times. We want to connect with the listener through the only means of communication we understand — art."
—Dan Reynolds
Advertisement:

Imagine Dragons is an Alternative Rock band formed in Las Vegas in 2008. Their music ranges from Self Empowerment Anthems to tunes about the Darkest Hour, from Silly Love Songs to Breakup Songs. They rose to prominence with their album Night Visions in 2012, and the three hit songs that came from it; "It's Time", their first hit; "Radioactive", which earned the band a 2014 Grammy Award for Best Rock Performance, and "Demons".

The band has also recorded songs for the movies The Hunger Games: Catching Fire, Transformers: Age of Extinction, Me Before You, Suicide Squad (2016), Passengers (2016), and Ralph Breaks the Internet, the mobile game Infinity Blade III, and the 2014 League of Legends World Championship (where they also appeared and performed live at the Grand Final). Frankenweenie and Iron Man 3 have some pieces from the band on their respective tie-in albums, but these do not appear in the movies themselves.

"A troper, a troper, I've turned into a troper, and it keeps getting stronger":

In the lyrics video for "Zero", winning a free browser game installs a feline virus which turns everything into cat memes.

Example of:
The Internet Is for Cats

In the lyrics video for "Zero", winning a free browser game installs a feline virus which turns everything into cat memes.