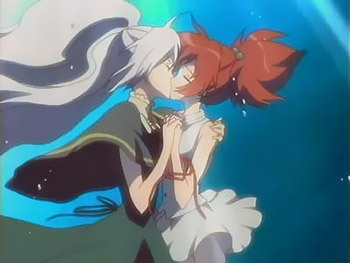 Romantic, isn't it? Don't ask how they can breathe.
"And it was pretty much the best underwater kiss of all time."
— Percy, Percy Jackson and the Olympians
Advertisement:

There's something about a kiss underwater that's more romantic or emotional than a regular kiss. Regardless of how it occurs, the added dramatic effect is often used to give an extra push to the scene. Even if the kiss is only for practical reasons, it's still a Ship Tease moment. There are two types, which may overlap or lead into each other:

Actual Kiss, where the kiss is simply a kiss. Additionally, it can be related to Super Not-Drowning Skills, if it happens to be a very long kiss. This can be done in Real Life of course, but your mileage may vary on how romantic it is in practice.

Breath of Air, where the kiss is used to transfer oxygen. It can overlap with Kiss of Life.

Depending on the situation, it may or may not be involved in a Two-Person Pool Party. See also Symbolic Serene Submersion.

Breath of Air
Anime and Manga