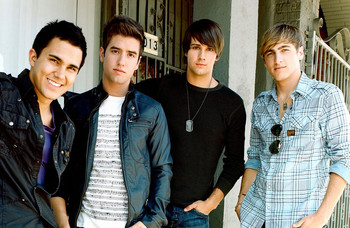 Big Time Rush (BTR) is an American Boy Band, created by Nickelodeon in 2009 for the show of the same name.

The group was able to establish itself as a successful band independent of the show, releasing three albums and three extended plays, with five tours. One of these tours, 2012's Better With U tour, also served as fellow boy band One Direction's first US performances.

Following their television show's conclusion, the band went on indefinite hiatus in 2014 up until 2021 when they announced their reunion and started performing live again.

Tropes in their works: