Due to its nature as a sequel, spoilers for Full House are unmarked. You Have Been Warned! 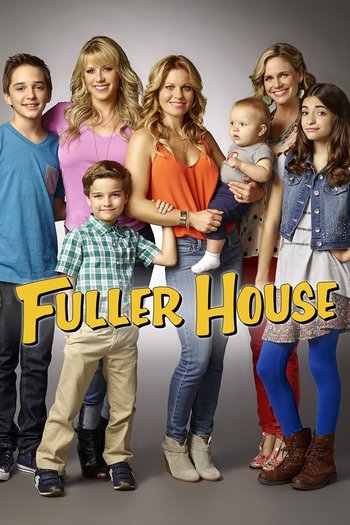 Fuller House is a Gender Flipped Sequel Series to Full House, created by Jeff Franklin like the original. A Netflix original series, it premiered on February 26, 2016 and ran for five seasons (the third and fifth split into two halves), with the final episodes premiering on June 2, 2020.

Taking place some 20 years after the original, Donna Jo "D.J." Tanner (Candace Cameron Bure) is grown up with three kids of her own, with her last name now Fuller. Following the death of her husband while on the job as a firefighter, she moved back in with her dad in her old home to get her life back together.

Before the house is set to be sold and the family go their separate ways, a big family party is held where it's revealed that while D.J. has been putting on a strong front, she is secretly overwhelmed with the prospect of taking care of her family by herself. Her father Danny (Bob Saget) decides to offer the house to her, after which her sister Stephanie (Jodie Sweetin), who's had a storied career as a DJ living in England, decides to drop everything to help out her sister, and her best friend Kimmy Gibbler (Andrea Barber) joins them with her daughter. Sound familiar?

Now has a Recap page and a Character Sheet in need of help.

Fuller House was the first series from Miller-Boyett Productions since the short-lived Olsen Twins vehicle Two of a Kind as well as effectively the company's last TV series due to executive producer Thomas L. Miller's death in April 2020.

The Full House family throws shade at Michelle for missing the reboot reunion.

The Full House family throws shade at Michelle for missing the reboot reunion.