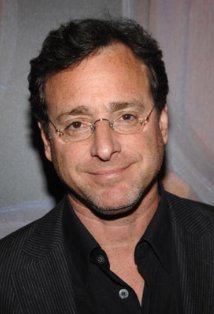 Robert Lane Saget (May 17, 1956 - January 9, 2022) was an American comedian and actor known for diabetes-tasting family-friendly television and scatological standup performances. After mild success as a standup comic and some television hosting, he was cast on the television series Full House as single father Danny Tanner. He also took up hosting America's Funniest Home Videos.

After Full House ended, he did some less family-oriented work, like directing the Norm MacDonald comedy Dirty Work and cameoing in Half Baked to deliver the memetic (largely due to the fact that it's Bob Saget saying it) line "Marijuana's not a drug, I used to suck dick for coke!"note I seen 'im!

Saget later appeared in the documentary The Aristocrats, delivering one of the filthiest versions of the joke in the film, and toured with a filthy standup act which was filmed by HBO as That Ain't Right. He appeared on Entourage, spoofed March of the Penguins with Farce of the Penguins and was roasted by Comedy Central.

He also narrated How I Met Your Mother and was a contestant on The Masked Singer in the fourth season.

On January 9, 2022, Saget was found unresponsive in an Orlando hotel room by employees while he was in the midst of doing a stand-up tour. He was later pronounced dead at the age of 65. His cause of death was later determined to be a brain hemorrhage caused by a fall that severely injured his head.