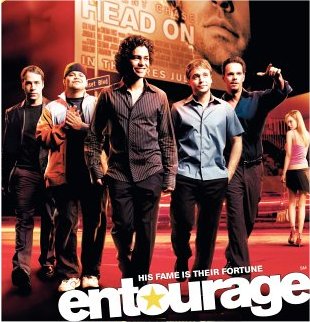 Good ole' V-Formation Team Shot.
"I got into this business so I wouldn't have to work."
— Vince
Advertisement:

Entourage is an American dramedy that broadcasts on HBO. The series follows Vincent Chase and his group of friends as they navigate the exciting, dramatic and volatile world that is being a movie star in Hollywood.

The show takes place in a fictional/parallel Hollywood. Real movies and stars may be referenced (and appear) from time to time, but the movies Vince stars in are not real. For instance, in-universe, Vince's Aquaman holds the record for the highest grossing opening weekend of all time, a fact espoused regularly for several seasons. It is noted that it beat the record previously held by (the real-life) Spider-Man. However, in real-life, this record has been beaten many times over since then, a fact never brought up in the show. This parallel Hollywood can create one heck of a Celebrity Paradox when guest stars appear as fictional portrayals of themselves, while in the same episode another well-known guest star may be appearing as a completely original character.

The supporting characters worth mentioning:

The show, and many of these characters, are based on the Real Life experiences of Exec Producer Mark Wahlberg while he was an up-and-coming actor.

The show has received much critical acclaim and a large regular audience, with a boatload of Emmy and Golden Globe nominations since it began in 2004. So far, the biggest winner has been Jeremy Piven, for his role as Ari, with 3 Emmys and 1 Golden Globe.

An Entourage movie was released on June 3, 2015 and served as a grand finale to the TV series.