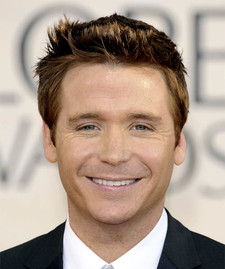 Kevin Connolly is an American actor and director. He was born on March 5, 1974 in Patchogue, New York. In terms of his acting career, he's best known for his role as Eric Murphy in the series Entourage and his role as Ryan Malloy in the series Unhappily Ever After. Connolly additionally directed the 2018 feature film Gotti, which stars John Travolta as the titular New York mobster.

Tropes associated with Connolly's work include: