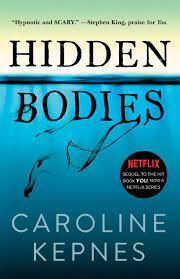 Things have been rough for Joe Goldberg since he murdered his girlfriend.

Having killed Beck at the end of You (2015), Joe meets a nice girl — Amy. Well, at least he thinks she's nice. When she ends up robbing his book store and fleeing across country to Los Angeles, Joe's not willing to let her go. Joe wants revenge.

But his plans are thrown off when he meets Love Quinn, a beautiful widow and scion of the ridiculously wealthy Quinn family. Joe being Joe, he immediately falls head over heels for Love, and she seems to feel the same way about him.

But Joe being Joe, there are, of course, complications. Love's brother Forty is...well, he's just terrible — a vainglorious drug addict with Hollywood ambitions that far exceed his exceptionally limited talents. And then there's David Fincher — not the director, but an LAPD cop who moonlights as "security" for movie stars and thinks he's more of a friend to them than he truly is.

Things are never simple with Joe Goldberg, after all. But Joe wants love, and he wants Love. And he's willing to do just about anything to get what he wants.

Followed by a sequel of its own, You Love Me. Adapted as the second season of Netflix's series based on the books.