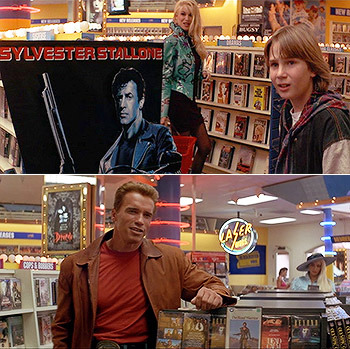 "The man's an artist."
"Within the reality of one specific fiction, how do other fictions exist?"
— Chuck Klosterman
Advertisement:

When a big-name movie or television star has their careers referenced during the work itself, it creates a sort of paradox to the audience where the actor as an actor is somehow a different person from that same actor as their current character. If a Celebrity Paradox is in play, the actor-as-character-X exists in Work X, the work itself references Work Y, in which actor played character Y, but the idea that actor-X and actor-Y are the same person is completely ignored (barring As Himself performances).

Normally, Willing Suspension of Disbelief causes the audience to ignore the idea that Spock looks a lot like Leonard Nimoy, but if Star Trek makes a reference to Nimoy's previous works, the paradox comes into play as the audience may start questioning the factual actor's existence in either fictional universe and who played what role in the fictionalized version of the referenced work. They may also start asking if other actors from that work are going to show up.

It's important to note that, if actor-as-character-X exists in both Work X and Work Y, then it is not an example of this trope. Another way to put this is that "character X appears in both" is insufficient; the actor needs to be in a different character role. This disqualifies Sequels and other works set in the same universe where one actor plays the same role. There's nothing strange about such an example anyway; it's a sequel so it makes sense for the actor to reprise the role.

Something else that disqualifies an alleged example is if an actor plays different roles in the same work. One way to put this is that "actor-as-character-X and actor-as-character-Y exist" is insufficient; character-Y needs to be from a different The 'Verse compared to Work-X. Otherwise you've just got internal Consistency and You Look Familiar.

If Ahnold is the star of the movie, who stars in Ahnold movies?

If Ahnold is the star of the movie, who stars in Ahnold movies?