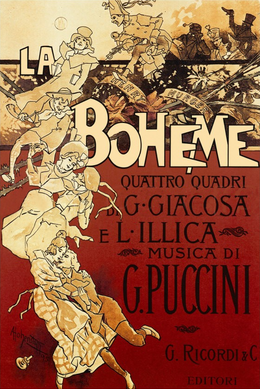 Giacomo Puccini's 1896 opera La Bohème, loosely based on the novel Scènes de la vie de bohème by Henri Murger, is one of the best-loved and most frequently performed operas today. It is also the (even looser) basis for the Rock Opera RENT.

Note: Despite the French setting and title, this opera is entirely in Italian, so adjust your reading accordingly.

It is Christmas Eve in Paris in 1830. Marcello, a painter, Rodolfo, a poet, Schaunard, a musician, and Colline, a philosopher, are cheerfully living the Bohemian life together in their garret apartment. Schaunard has brought home a veritable fortune from a musical job (the murder of an annoying parrot), and after a close call with the landlord collecting rent, they decide to go out and celebrate. Rodolfo stays behind a few minutes to finish writing an article, and his beautiful and pure-hearted upstairs neighbor Mimì enters, asking for a light for her candle. The two promptly fall in love.

In the second act, the five friends go out on the town together. Rodolfo and Mimì revel in their new love, but Marcello acts cynical, because he has had his heart broken in the past. At the café, they notice Marcello's old flame Musetta with a rich and boring old man, and she begins engaging in all sorts of histrionics to get Marcello's attention. He resists her charms at first, but soon gives in, and the six of them leave in triumph after pushing off their check onto Musetta's date.

The third act takes place after a span of several months: Mimì shows up early one morning at the inn where Marcello and Musetta have found work, and tells Marcello that Rodolfo has abandoned her, after behaving cruelly and being suspicious of her. Then Rodolfo, who is already sleeping inside, shows up, causing Mimì to hide. He complains of Mimì's infidelity and flirtatiousness, but then reveals the real reason for his leaving: Mimì is seriously ill, and he cannot stand to see her waste away in his cold room. After Mimì reveals herself by a fit of coughing, she and Rodolfo embrace, and agree to break up so that Mimì can find a wealthier lover—but because winter is so lonely, they will stay together until spring! Meanwhile, Marcello confronts Musetta about her flirting with other men, and they also break up in a violent argument.

Act Four begins back in the garret, with Rodolfo and Marcello both lamenting their lost loves. The mood brightens when Schaunard and Colline arrive with some bread, and the four friends gaily parody an upper-class banquet, complete with dancing and dueling. The fun is interrupted when Musetta arrives with the news that Mimì has collapsed on the stairs. The others band together to save her: Musetta pawns her earrings and Colline his coat. Mimì and Rodolfo are left alone together for the last time to recall their love and happiness. The others return with medicine and a muff for Mimì's cold hands, but it is too late. Mimì dies, and the opera ends with Rodolfo crying out her name over the body.

La Bohème has been adapted for other media many times, including a 1926 film (silent! no music!) starring Lillian Gish and John Gilbert.