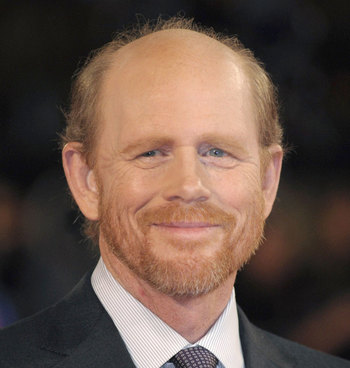 "So like any good, closeted young lesbian of the Seventies, I developed a raging crush on Ron Howard from Happy Days."
— Jane Lynch, from her memoir Happy Accidents
Advertisement:

So remember that Opie kid from The Andy Griffith Show? Well, Ronald William "Ron" Howard (born March 1, 1954 in Duncan, Oklahoma) grew up to star in Happy Days and discovered while being one of the biggest sitcom stars in the world that he liked directing. He's good at it, too, as his many awards show. And he was the narrator (and himself!) on Arrested Development.

He is the son of Rance Howard father of Bryce Dallas Howard and older brother of Clint Howard.

Some of the films he's directed include:

His acting roles include: