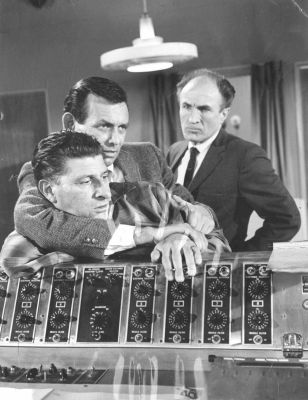 A groundbreaking American drama series created by Roy Huggins and produced by Quinn Martin, which aired on ABC from 1963–67.

The premise: Dr. Richard Kimble (David Janssen), a pediatrician from Stafford, Indiana, has been wrongly convicted for the murder of his wife, Helen. However, while he's being transported to Death Row by train there is an accident that enables him to escape.

Now Kimble must continually travel throughout the country, looking to find the true murderer — a one-armed man (Bill Raisch) who he saw running from his house that night before finding his wife's body —and clear his name.

Meanwhile, Kimble is pursued by Lt. Philip Gerard (Barry Morse), the Stafford police detective who was escorting him at the time of his escape. Gerard is determined to recapture Kimble, thus precluding the fugitive from simply settling down in some remote area with an assumed identity. In the meantime, Kimble takes small jobs and inevitably gets involved in the personal lives and problems of the strangers he encounters.

The Fugitive was adapted into a 1993 feature film, starring Harrison Ford as Kimble and Tommy Lee Jones as Deputy Marshal Samuel Gerard. There was also a short-lived remake series in 2000, which starred Tim Daly as Kimble and Mykelti Williamson as Gerard. Meanwhile, the show's premise has provided the template for an entire subgenre of action and drama shows.

The rights to the original series were originally owned by QM Productions. They were subsequently acquired by Taft Broadcasting through Worldvision Enterprises (which actually had syndication rights before either it and QM were both acquired by Taft), Spelling Television (which once had a movie production arm, Spelling Films), Paramount Television (which produced Wings, also starring Tim Daly, and the television arm of Paramount Pictures), and currently CBS Studios. None of these companies (either TV or theatrical) were involved in subsequent remakes of The Fugitive, all of which were produced by Warner Bros. Entertainment, a result of Keith Barish taking the rights to the IP (but not the series itself) with him upon leaving Taft, and eventually teaming up with former QM Productions employee and latter-day producer Arnold Kopelson to produce the 1993 film with WB, who has retained the remake rights ever since. Another remake of the series premiered on August 3, 2020 on Quibi starring Kiefer Sutherland and Boyd Holbrook. The series was not renewed for another season as a result of the shutdown of Quibi.

Trope examples from the original series:

Trope examples from the 2000-01 revival series: