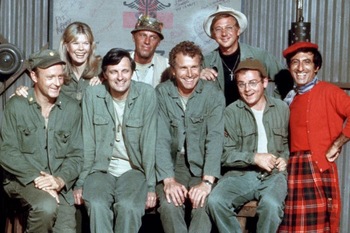 The main cast from Seasons 1-3. From left to right: Maj. Frank "Ferret Face" Burns, Maj. Margaret "Hot Lips" Houlihan, Capt. Benjamin Franklin "Hawkeye" Pierce, Lt. Col. Henry Blake, Capt. "Trapper" John McIntyre, Lt. (Father) Francis Mulcahy, Cpl. Walter "Radar" O’Reilly, and Cpl. Maxwell Q. Klinger.
"This is a movie about the Korean War, starring army doctors who deal with death every day, with a theme song about suicide ... and, against all odds, it's fucking hilarious. So hilarious, in fact, that a movie alone couldn't contain the hilarity, and it spawned a TV show that lasted more than twice longer than the war the characters were supposed to be serving in. Yes, they kept a war going for a decade because it was so funny."
— Maxwell Yezpitelok,

One of the most commercially and critically successful series in American television history, M*A*S*H is — to quote its lead character, Hawkeye Pierce (Alan Alda) — "finest kind".

The show aired on CBS for 11 seasons (1972–83), seven years longer than The Korean War during which it takes place. The setting is the 4077th MASH (short for Mobile Army Surgical Hospital,

a type of Army field hospital first activated during the last month of World War II), located three miles from the front line in Uijeongbu. There the doctors and nurses perform "meatball surgery" and otherwise do what they can to fix up the wounds (physical and/or psychological) of the war's numerous casualties, all while staving off their own fear, boredom, stress, and fatigue.

M*A*S*H was first presented as a wacky, slightly edgy sitcom based on Robert Altman's hit movie—which was itself an adaptation of Richard Hooker's novel—but the series moved away from strictly comedic storylines early in its run (starting with Season 1's "Sometimes You Hear the Bullet"), often incorporating dramatic plotlines in conjunction with comedic ones in the same episode. The show is often cited as TV's first true Dramedy.

"Abyssinia, Henry", the final episode of the third season, was one of the major turning points for the series. The last appearance for both Henry Blake (McLean Stevenson) and "Trapper" John McIntyre (Wayne Rogers), its tragic shock ending—Henry's home-bound plane was shot down; "there were no survivors"—delineated the line between "Funny M*A*S*H" and "Dramatic M*A*S*H", as many fans would later divide the series. The fourth season proved crucial to the show's long-term success; few series up to that time had been able to lose one of their primary cast members, let alone two of them, while still managing to keep their audience. But the creators' decision to replace Henry and Trapper with completely different character types in Sherman Potter (Harry Morgan) and B.J. Hunnicutt (Mike Farrell) succeeded, and the show continued to enjoy high ratings and critical acclaim.

Character development often came first in the "Dramatic M*A*S*H" phase. The previously one-note Margaret "Hot Lips" Houlihan (Loretta Swit), for example, became more sympathetic and complex, as demonstrated in episodes such as "The Nurses". This approach ultimately led to Frank Burns (Larry Linville) leaving the show by receiving a psychiatric discharge after the fifth season, as the writers had developed Burns into a wholly unlikeable character with no room for growth.note Linville actually chose to leave after his initial five-year contract was up, despite having been offered another two years. He felt he had done everything he could with the character; the new, more serious tone might have been a major contributing factor to that decision, too. Burns was replaced by Charles Emerson Winchester III (David Ogden Stiers), who not only proved to be an actual asset to the medical staff, but even (eventually) became a nicer guy...in his own way.

Other ways in which M*A*S*H changed how the Sitcom was perceived was by the use (or disuse) of the Laugh Track, commonly imposed by the networks if a studio audience would not be present at an episode's filming. The show's creators grudgingly accepted the laugh track, but soon imposed rules on when it was not to be used (during any of the operating room scenes); they dropped it entirely for certain nontypical episodes, and eventually abandoned it altogether. (The laugh track was never used when the series was broadcast by The BBC in the UK, and DVD releases on both sides of the pond offer the option to watch the shows with or without it.)

M*A*S*H revolutionized the use of camera movements and editing styles on television—one example is the use of long tracking shots moving with the action (usually of wounded being transported from the helicopter/bus/Jeep to the OR). The series also experimented with unusual storylines married with different camera moves and screen devices. One special camera technique, Boom Up and Over, was new to television at the time; its use in sequences where camp announcements were shown from the "perspective" of the loudspeaker was groundbreaking and memorable.

Critics and fans note that the show also did Formula Breaking Episodes very well, by keeping its tone consistent while experimenting with unusual storylines or storytelling techniques. "Hawkeye" is a 25-minute monologue by the eponymous character, as he struggles to stay awake after suffering a head injury. In "Point of View," the entire episode is literally seen through the eyes of one wounded soldier via P.O.V. Cam. "Life Time" is told in Real Time, with a clock in the corner of the screen ticking off the minutes as the doctors race to replace a soldier's crushed aorta before he becomes paralyzed. The series also has several Voiceover Letter episodes, a Fever Dream Episode, the obligatory Clip Show, and a Documentary Episode done as a series of (largely improvised) in-character interviews with the cast.

For twenty-five years, the final episode of the series—"Goodbye, Farewell and Amen", which aired on February 28, 1983—held the record for the most-watched single broadcast in U.S. television history, with a 60.2 rating (percent of households watching), a 77 share (percent of households watching, of those watching some program at that time), and a total audience of over 125 million viewers. Although several Super Bowls have since surpassed it, the M*A*S*H finale still holds the record for non-sports programming.

Considering that the original novel consisted mostly of the characters engaging in wacky fratboy hijinx and boasting about how much sex they have (and showed a truly awful degree of sexismnote "Trapper" got his nickname for using a train toilet to take advantage of his prom date and nobody seems to care that this may have been rape as long as he 'got some'; 'Me Lay' is famous for using his absurdly crass pick-up line, "Me lay, you lay," to acquire a stupendous 'batting average'; the doctors' only interest in the epileptic whore down at the local brothel is in how much fun it is to have your penis inside her when she has a seizure; the reputation of the unit depends in part on the size of the dentist's male organ; the list goes on and on. to boot), to have worked it into such a long, successful, and at times thoughtful series is an excellent example of Pragmatic Adaptation, and a very welcome change in a world full of Adaptation Decay. Of course, Dr. Richard Hornberger, one-half of the writing team behind the pseudonymous author of the original book and kinda probably the model for Hawkeye, didn't see it that way; he was known to rant about it at length. (In a sequel novel, MASH Mania, he has his version of Hawkeye state how much he enjoys going down to the State University to "kick the shit out of a few liberals".)

The show has both a character page and a recap file.