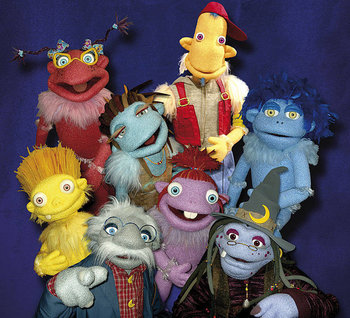 The inhabitants of Lunalunera.note From top to the bottom, left to right: Lupita, Lulo, Lula, Lublu, Lucho, Lulila, Lutecio and Lubina.
Los Lunnis is a Spanish children's television show in the vein of The Muppet Show. Probably the most famous and successful in the history of Spain's television, it started in 2003 and is still active today.

It tells the life and adventures of a community of colourful beings named Lunnis, who live in a planetoid near Earth named Lunalunera (who might or might not be the moon). The main protagonists are a bunch of local Lunni kids, among which there are Lucho (a mischievous yellow Lunni), Lupita (a nerdy, uptight red Lunny girl), Lublú (a blue and sensitive Lunni poet) and Lulila (the youngest of all, a curious, female purple Lunni). They aren't alone, as Lunalunera houses such characters as the eccentric good witch Lubina, the science professor Lutecio, the schoolteacher Lumbrela and a pair of Lunni teenagers named Lulo and Lula, as well as the evil galactic pirate Lucanero, who secretly wishes to dominate Lunalunera. Several human guests appear too, as well as a really long list of episodic characters.

Originally conceived by Televisión Española screenwriters Carmina Roig and Daniel Cerdà, Los Lunnis had a tough start, as it came to replace the cult children's show TPH Club in what was effectively an executive war inside TVE. However, and against the predictions of many who considered the new show too childish and outdated in comparison to its predecessor, it soon overshadowed completely TPH and became a televisive juggernaut, spawning songs, series, movies and even an entirely new channel, Clan TV, the new mainstay of children's programming in Spain. With its long tenure and cultural impact, which included its characters being officially named ambassadors of UNICEF of all things in 2005, Los Lunnis are what most modern Spanish Millenials see when they think about the TV of their childhood.

Los Lunnis's charm came not only from its creativity and marketing power, but also from the sheer charisma of its characters and performers, its surprisingly smart episode plots, and the metric crapton of Parental Bonus the show usually contained, to the extent that even teenagers and adults enjoyed it openly and unironically. It also served to both launch and relaunch the career of some guests (particularly Spanish-Cuban singer Lucrecia, who conducted the show at several stages), and this goes without mentioning the show's positively famed Christmas specials, which brought to TVE names like Robbie Williams, Coldplay and Shakira. The show's own soundtrack won eight Platinum Discs and was number one in sales in Spain thrice, among other many accolades both in music and as a whole.

The show's golden age ended in 2008 with the finale of its main episodic TV series, Los Lunnis: La Serie, and the first departure of its host Lucrecia the next year. With the show's Channel Hop from La 2 to Clan TV, it underwent a huge retool, losing most of its puppet cast and adding a couple new ones, giving slightly new characterizations and storylines to the remaining (which basically amounted to the protagonist gang and some others), and adopting a less serial, more educative style of broadcast.