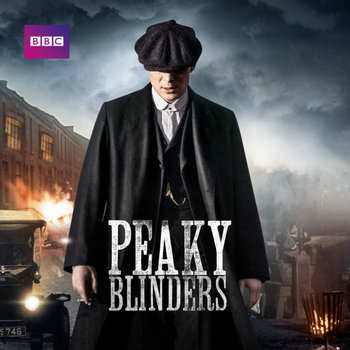 May you be in heaven a full half-hour before the Devil knows you're dead.
Take a little walk
to the edge of town
Go across the tracks
Where the viaduct looms
like a bird of doom
as it shifts and cracks
Where secrets lie in the border fires
in the humming wires
Hey man, you know you're never coming back
Past the square, past the bridge
past the mills, past the stacks
On a gathering storm comes a tall handsome man
in a dusty black coat with a red right hand
Advertisement:

Peaky Blinders is a BBC Period Criminal Procedural series which began in 2013. Set in post-World War I Birmingham, it centres around the Irish Traveller-Romani Shelby family, whose men have returned from the Great War and begun to build up their street gang into a criminal empire. The street gang is known as the Peaky Blinders, and their hats... are their hats. Peaky Blinders stars Cillian Murphy as new kingpin Tommy Shelby. The supporting cast includes Helen McCrory as Shelby matriarch Aunt Polly, Sam Neill as CI Campbell and Tom Hardy as Jewish gangster Alfie Solomons.

The show has aired five seasons on both BBC and Netflix. Word Of God from creator Stephen Knight is that he plans to take the Shelbys right up to the beginning of World War II. After the show temporarily went on haitus due to the COVID-19 Pandemic, it was announced in January 2021 that production had restarted on the Sixth Season and that it will be the last season of the show, though Knight also revealed in the same update that "the story will continue in another form".

open/close all folders
A to D
E to I
Advertisement:
J to P
R to Y
You're one microscopic cog in his catastrophic plan, designed and directed by his red right hand...