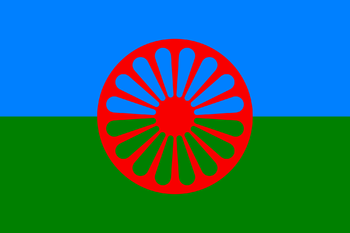 The Romani have been a popular subject in media due to the many colorful stereotypes associated with the culture. In many media portrayals, they are referred to by the more commonly known name of "Gypsies," but it is important to note that to many Romani, that word is a racist term sometimes considered analogous to the N-word. Not all feel this way, and are fine with using the word to describe themselves as either a neutral term or as an act of reclamation, though they may differ on whether or not it's okay for non-Romani to refer to them as "Gypsies". A British study found that many Romani feel it's a term of pride. It's a legal term under English law and it's used officially in the names of some Romani organizations.

In fiction, Romani are usually depicted as dishonest: thieves, pickpockets, con artists, trespassers, and tricksters who wouldn't think twice about taking everything you own that isn't nailed down, and a few things that are. The danger of children being kidnapped by Romani was a common old wives' tale. The stereotype for dishonesty may or may not be where the term "gypped" probably comes from.note The origin of "gypped" is not really known. One reason to doubt this explanation is that the term seems to have originated in the United States, which although it does have one of the largest Romani populations, if not the largest, in the world, American Roma tend to be assimilated and settled to the point that they're indistinguishable from the larger population). In Europe, there are a number of Romani criminal organizations, both street gangs and mafias, but they are no more representative of all Romani than The Mafia is of all Italians. Not helping the perception is that Romani often hide their heritage to avoid discrimination, meaning that non-Romani (gadjo) often don't recognize the law-abiding Romani they encounter as Romani.

Romani are almost always shown as universally romantic nomads. They're mysterious and magical people, as the sheer number of Romani Fortune Tellers and Gypsy Curses demonstrates. They're also associated with Tarot cards, and sometimes credited with inventing them. Their women are fiery-tempered temptresses or wise old crones. They dance in flamenco outfits to Hungarian music. They wear brightly colored clothes and travel in brightly decorated caravans. They have dark skin and speak with an Überwald accent, regardless of where they are and where they're supposed to be from.

In reality, the Romani-diaspora is a collection of ethnic groups found throughout Europe, the Americas, and the Middle East. They originally emigrated from India but were mistaken for Egyptians by Medieval Europeans, which is how the term "Gypsy" originated (and why it should be capitalized, like Indian or Japanese). While they were originally moderately dark of skin, several hundred years of intermarrying with other ethnic groups have allowed many modern Romani to pass as White, Indian, or even African if they so choose. The bright outfits and wagons are Eastern European and used to be Truth in Television. Part of the reason they dressed that way was advertising. Nomadic Romani were certainly a historical fact, but the majority of modern Romani live in standard housing and are every bit as tech-savvy as their neighbors.

In addition to perpetuating stereotypes about the Romani, the media are largely blasé about slurs against them, using insulting terms like "gyppo" without much concern; and to many Romani today, the word "gypsy" itself is an offensive slur, though (see paragraph above) there is evidence that British Romani actually encouraged the term, as a supposed Egyptian origin gave their fortune-telling schtick more credibility — the same goes for the German word for Gypsy, "Zigeuner". It is considered to be unacceptable today and "Sinti

und Roma" (technically, the Sinti are a subgroup of the Roma — which is just another word for Romani — but the Sinti do not use the term for themselves and speak a different dialect of the Romani language) is used instead. Apparently, the Romani are still Acceptable Ethnic Targets — another holdover from previous

when the Romani were one of the Western world's Butt Monkeys. Between half a million and 1.5 million Romani were killed by SS Einsatzgruppen and in SS concentration, death-through-work, and extermination camps during World War II. note  It's hard to get definite numbers, because Romani were often shot on sight by the death squads, instead of bothering to capture and ship them to camps. The Roma Holocaust is known by ethnic Romani as Porajmos ("the Devouring"). J. R. R. Tolkien noted that Nazi persecution of Romani was rather ironic considering they are direct descendants of the historical Aryans (i.e. the Indo-European settlers of ancient India).

Persecution of Romani is sometimes called antiziganism, though this term is controversial because it derives from the aforementioned term "Zigeuner," which—like "Gypsy"—is often considered derogatory. Historically, very widespread (one of the crimes punishable by death in the 18th-19th century "Bloody Code" in England was "spending more than one month in the company of Gypsies"note Given the times, it may have not included only Romani but also all transients, particularly the Irish Travellers), it still continues today. As recently as 2010, Paris had come under fire from Amnesty International for attempting to deport several hundred French Roma

to Bulgaria and Romania, without regard of where they were actually from or whether they lived in the much-maligned "camps" — in 2013 there was another polemic episode called the "Leonarda case".

Several other countries have also come under fire from the United Nations and Amnesty International for segregationist policies.

One of the very few exceptions to the treatment of Romani as social pariahs can be found in Soviet Union, and in modern Russia. Contrary to the case in Western Europe, while Ruska Roma are certainly subject to prejudice and bigotry, there's been a huge co-opting of Romani culture in Russia since the 19th, but especially in the 20th century — particularly poetry, music, dance, and theater, all of which were considered a form of "high folk culture" in the USSR. While some Roma were targeted during the Purges and the whole population suffered enormously during the Second World War, it also cemented many components of Roma culture into Soviet folklore, particularly entertainment. Combined with a more serious attempt to assimilate Romani communities, and their status as a small but legitimate Soviet nationality, the Iron Curtain divide between Communist and Capitalist Roma was unusually reversed

, with the image of affluent, socially-accepted Romani living in the USSR compared to the outcast Romani living in Western Europe—indeed, unlike the case in the West, the stereotype of Roma in the former-USSR more closely resembles the longstanding American stereotype of Jews: clever, frugal, well-traveled and with an assumed talent towards entertainment and music. Some of the most successful Romani musicians and playwrights were made People's Artists of the USSR, and some enjoyed such a degree of fame and success, like Jazz Vocalist Valentina Ponomaryova, to even have their LPs distributed in the United States in the same period. The collapse of the USSR has seen a decline in institutional Romani arts (now often seen as outdated or old-fashioned, not unlike other examples of Soviet culture), but the legacy of national promotion has endured: the largest Roma theater in the world still operates in Moscow

, and its performances are considered on par with other institutions like the Red Army Choir (the two groups have shared the stage on no less than Eurovision

, and the Choir's dance ensemble practices Romani dance), and Romani performances are still popular for holidays, birthdays, and public celebrations.

Despite generally avoiding assimilation in most ways, Romani do generally follow whatever faith is dominant where they live. Originally they were Hindu; few practice it today but some trace elements survive syncretically. In Western Europe they are mostly Catholic, in Eastern Europe, they are usually Orthodox, in the Middle East primarily Muslim, and in the Balkans, they are divided between Islam and Orthodoxy. A growing Pentecostal movement is also found in Roma communities in the United States and Spain. The Patron Saint of Christian Romani is St. Sarah, also known as Sara-la-Kali. She hasn't been formally canonized by any church and many anthropologists believe she is a Christianized version of the Hindu goddess Kali. The Romani, particularly in Eastern Europe and Russia, also bear some less clearly defined syncretic beliefs in the Keshali and very complex demonology. See Romani Mythology for details.

There is no significant relation (ethnic or etymological) to the Romans or the Romanians. The term “Roma” is actually derived from the Hindu god Rama, harkening back to their origins as Hindus from Western India. Sometimes the two are confused, which is probably because the "â" used in the native name for Romania gets lost in the English translation.note And just to confuse things further, Romania does have a large Romani minority. There is also no connection between the Romani and Irish Travellers beyond a historical reputation for a nomadic lifestyle and skill at boxing.

Depictions of Romani in fiction: