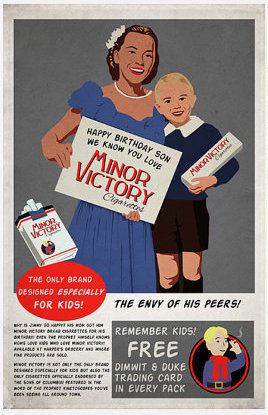 "I'm so sorry to trouble you—but tobacco is the one drug every doctor forbids his patients and prescribes for himself."
— Dr. Wells, The Bat
Advertisement:

In contemporary North America, about 14% of the population smokes tobacco. The number is small enough and the practice has been stigmatized enough since the 1950's-1960's (since the science about health effects of smoking, and the dangers of being just in the vicinity of smokers with second-hand smoking, became widely known) that younger generations are accustomed to designated smoking areas and smoke-free public buildings. Smoking indoors in public buildings has been illegal throughout the entire U.K. since 2007, and smoking rates dropped dramatically as a result of this smoking ban. Tobacco use rates continue to fall as older smokers die off without as many younger consumers lighting up for the first time to take their place, while increasing numbers of those remaining tobacco smokers are ditching the cigarettes and taking up nicotine vaping instead.

However. If you're in a period piece, or a retro-future, or a pulp cyberpunk future, a crime-noir piece, or even an outdated 20 Minutes into the Future from a past decade, you might have to put up with the fact that everybody smokes—especially men (it was uncommon for women to smoke until the 1920s when "masculine" behavior became more acceptable). If the setting dates to before the 1970s, ashtrays are going to be everywhere and there will be no such thing as a "non-smoking section" of a restaurant. If it's before the 1960s, smoking might even be seen as healthy and virile. During the period of peak tobacco use in America (late 50s-early 60s), more than 40% of the population smoked with some regularity.

Note that the extent to which smoking has been stigmatized varies from country to country, so this trope may still apply in modern media depending on country of origin. Eastern Europe and East Asia in particular have high contemporary smoking rates.

Smoking is still comparatively commonplace in Japan, and so it is also quite common in anime. Having a character smoke (who is old enough to do so legally, obviously) says very little about them as a character, and background characters are fairly often seen with cigarettes as well. It's worth noting however that overall smoking rates in Japan have fallen sharply in the last ten years (after regulators started cracking down on it as public health issue), so depictions of smoking are also slowly changing. Men have always had much higher smoking rates than women in Japan, so a female anime character's smoking habits are more likely to be significant than a male character's.

Compare Random Smoking Scene, where there's no real plot-relevant reason for the character to smoke. Contrast No Smoking, for when smoking is censored.