Series / Dancing on the Edge 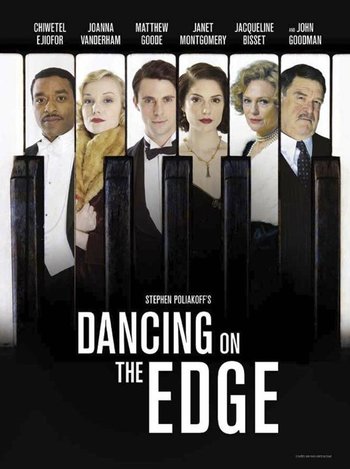 Dancing on the Edge is a five-part British drama series written and directed by Stephen Poliakoff, following the trials and tribulations of a black jazz band in the 1930s. After achieving fame by entertaining London's upper-class society and being championed by members of British royalty, their fortunes change when one of their members is found murdered, throwing them into a police investigation rife with racism, class prejudice and nationalism.

As well as the five episodes, there was also a short "bonus episode" released, which involved Stanley interviewing members of the band.

It was nominated for three Golden Globe Awards in 2013: Best Miniseries, Best Actor in a miniseries (Chiwetel Ejiofor), and Best Supporting Actress in a miniseries (Jacqueline Bisset), with Bisset winning.

It was also Mel Smith's final project before his death.