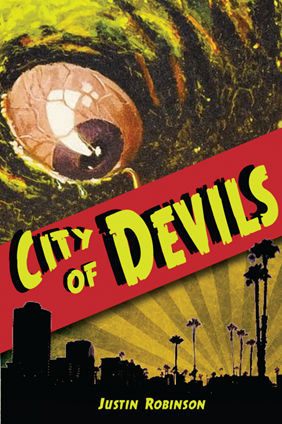 It's 1950s Los Angeles, but the Night War has changed everything. Monsters are the norm, and humans are the minority. Nick Moss is the last human detective in a city full of monsters, and he's tracking down a missing mummy. Along the way, almost every monster he meets wants to turn him into one of them. City of Devils

is a neo-noir comic novel with b-movie monsters.
Advertisement:

It has three sequels, Fifty Feet of Trouble and Wolfman Confidential continue the story of Nick Moss, while A Stitch In Crime stars meat golem Jane Stitch.

City of Devils provides examples of: