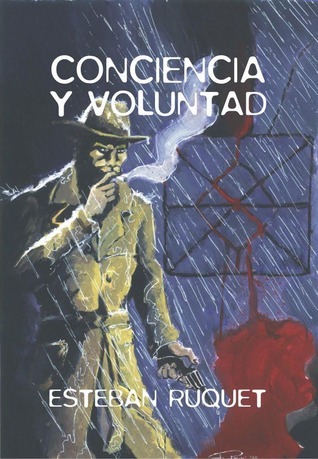 Conciencia y Voluntad is an independent novel by the writer Esteban Ruquet. It was published in Argentina in 2012 by Pixel Editores, a small publisher from La Plata city. The work has won the first prize from the Aurora Venturini award, and the prize money was used in order to publish it.

The plot revolves around the finding of the missing terrorist and political figure Franco Rocafirme by a young private eye in an Used Future, where the relatively minor city of La Plata has arised as a new Soft Empire after the sunking collapse of the modern civilization. Pablo Astoria, the private eye, is put in charge of this job by the old University professor Nicolás Pérez Aznar, an old friend of Rocafirme and also a major figure of the revolution.

The setting is placed in a Near Future year 2057 and revolves around the remains of the Western civilization, mixing the Noir genre and the soft Sci-Fi, and involves two cities: Ensenada and La Plata, now heavily changed by the wars and the climate changes. La Plata is now a sort of walled Crystal Spires and Togas citynote the walls are mainly to contain the waters, but also provide cover against the roamers of the ruins of the Greater Buenos Aires

that hides underneath an oppresive Empire around the control of the world sources of drinking water, after the fall of the old USA empire by his warmongery against half the world, the exhaustion of the oil and the fearsome climatic changes that made the coastal cities sunk. Ensenada is a misteriously non-sunked coastal city politically dependent on La Plata, though autonomous, where rain is omnipresent. Most of the main plot occurs in Ensenada, but the conclussion and major plot points happen in La Plata.