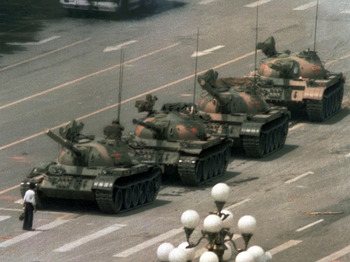 "I won't kill you, but I can stop your blade. And I'll keep doing it, over and over... until we understand each other."
— Shulk, Xenoblade Chronicles
A Badass Pacifist describes an Actual Pacifist who, without doing anything violent, is much more awesome than many of us will ever be, and commands all the respect you give 'the baddest guy on the planet' even though (or in some cases, because) they never go on the offensive. These are the people who will stand and take a No-Holds-Barred Beatdown without striking back and without giving in; they are also very fond of Turning the Other Cheek. A variation of a Stone Wall, in other words. If they do something proactive to defeat their enemies, it is never by using physical force, but by using words. Verbal Judo, Shaming the Mob, and Talking the Monster to Death are the tools of their trade. It is always their goal To Win Without Fighting — and win they do.
Advertisement:

Please note that this trope is not "Nice person who will kick your ass if you make them angry." This trope describes an Actual Pacifist who can completely defeat an enemy without any violence on their part whatsoever; perhaps they can take a beating from a Memetic Badass without backing down, giving in, or giving in to the temptation of betraying their ethics, or alternatively they can talk aforesaid Memetic Badass into putting down his weapon. Alternatively, they may be a variant on a gymnast — without landing a single blow they can escape a whole bunch of enemies, generally giving the impression that they could kick ass if they wanted.

Their presence often — but not always — indicates a more idealistic position on the Sliding Scale of Idealism Versus Cynicism. Frequently The So-Called Coward. Might be a Guile Hero.

Pacifist Run is what happens when a player is trying to be this in a video game. Contrast A Real Man Is a Killer and Pacifism Backfire. Compare Martial Pacifist. The Reluctant Warrior wishes he could be a Badass Pacifist. The Technical Pacifist is similar, but may resort to violence short of killing or allow someone else to do the dirty work; the Badass Pacifist succeeds without using any violence at all.

See also Violence Is Not an Option, for a situation when no amount of violence could save the day anyway.

Yep, the officers loyal to the government has to resort to fisticuffs because no-one wanted to use guns.